As Nick Taylor’s Sunday afternoon win took on an air of inevitability at Pebble Beach, our focus shifted to the day’s secondary dramas: world ranking points. As far as ranking drama goes, this was a Sunday worth remembering — especially setting up the Genesis Invitational, where nine of the world’s top 10 players will be teeing it up.

It’s hard to believe that Rory McIlroy hasn’t been world No. 1 since September 2015. Since then, these players have worn the crown: Jason Day, Jordan Spieth, Dustin Johnson, Justin Thomas, Justin Rose, Brooks Koepka. Twenty-one changes at the top of the game. Now, at long last, McIlroy has gotten back to the top of the mountain. On a week where neither he nor last week’s world No. 1 Brooks Koepka was playing, McIlroy won the battle of the numbers — now he gets the honor of being tops in the world. 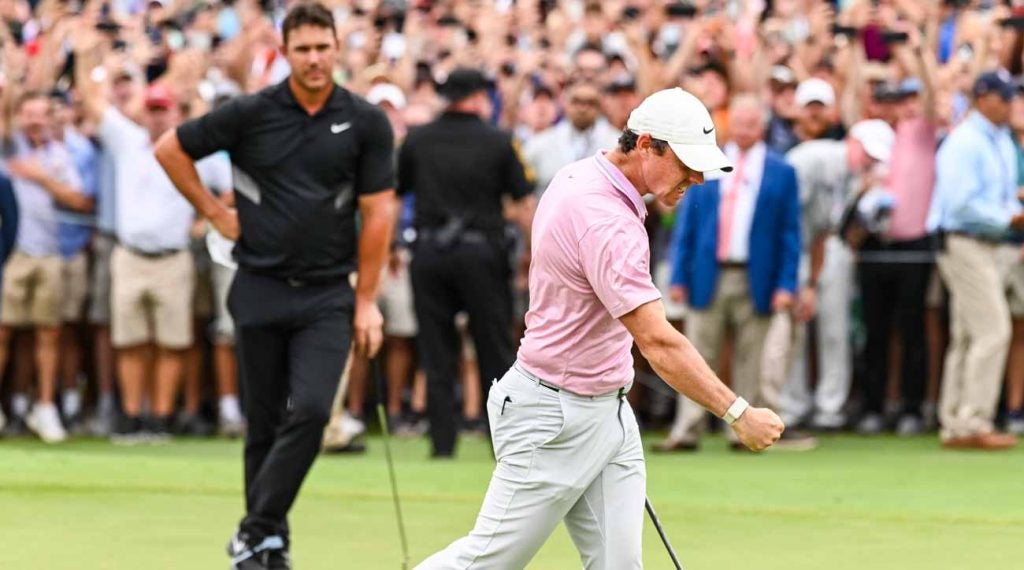 Rory McIlroy moved ahead of Brooks Koepka to claim the title of World No. 1.
Getty Images

Of course, Koepka could retake the crown with a strong showing at Riviera this week. To make things even more exciting, consider that Jon Rahm could play his way to World No. 1, too. Or we could see McIlroy cement his claim to the highest ranking in the men’s game. No. 1 is up for grabs.

World No. 50 is an important cutoff in the rankings world, in part because it means automatic qualification for the WGCs and all the advantages —money, points, starts — that affords players. As the action wore on Sunday, it became clear that Phil Mickelson would need to finish T2 or better to make his way into that coveted top 50. So when his birdie putt at No. 18 went wide, it meant Mickelson locked up 3rd place for the week and 55th in Monday’s world rankings.

Jason Day and Jordan Spieth were two others in need of solid results to ensure they made that top 50. Day was hardly his most spectacular self on Sunday, but his 3-over 75 was good enough to secure solo 4th and jump him to No. 38 in the world. Spieth’s Sunday was far better: he shot 5-under 67, the low round of the day, to jump 46 spots and into T9. Now, he’s back inside the bubble at No. 49.

In his three starts, Tiger Woods has finished 1-4-T9. Not bad, right? But he hasn’t exactly been racking up the starts. As a result, he’s slipped to No. 8 in the world, jumped by Webb Simpson last week and Patrick Cantlay this week. He’s importantly the 6th-ranked American player, too, and he’s made it clear he’d like to be in the top four who qualify for the Olympic Games in July. Good news for Woods: he’ll have a chance to take matters into his own hands this week.