PONTE VEDRA BEACH, Fla. — Two of the planet’s most talented golfers, Rory McIlroy and Tommy Fleetwood, entered Saturday at the Players with every opportunity to make a statement with their rounds. The European duo started the day at 12 under, three shots clear of everyone else. But they finished the day looking up at a different leader altogether.

Both fan favorites are sorely due for a win. Fleetwood held last week’s 36-hole lead at Bay Hill and still has never won a PGA Tour event, despite his meteoric rise to the game’s elite echelon. McIlroy has been on a run of impressive form; his worst result in the last five events was last week’s T6. But neither has won a tournament of any kind in over a year, unless you count the Ryder Cup (which both would hope you do).

The two are friends and frequent acquaintances. They’ve each bridged the gap between the Euro Tour and a fuller U.S. schedule. Neither threatens six feet in height, but both punish the ball. Each is thoughtful and pleasant, but notably independent — and therefore comfortable being independent together. This wasn’t even their first pairing of the week: that came during a kids clinic last Monday. So what’s it like playing together with a Saturday lead at a big event?

“We’re close, and I think we have that respect, and I think we’re comfortable enough with each other that we let each other just get on with our game,” Fleetwood said after the round. “I enjoy being out with him. He plays at a really good pace.” In other words, compatible. 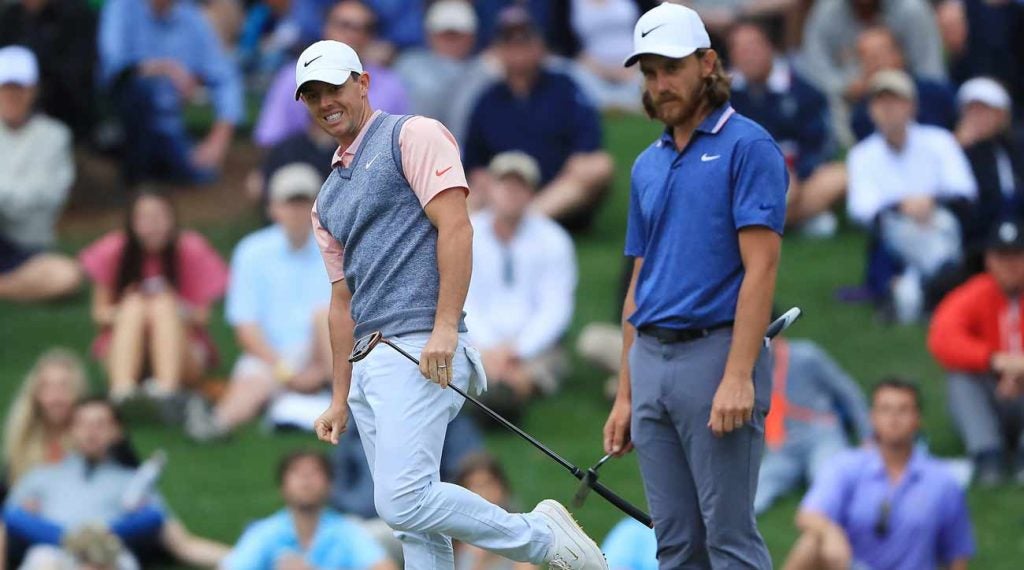 It was a battle for both Rory McIlroy and Tommy Fleetwood, but each ended up at 14 under, one shot off the lead.
Getty Images

But that compatibility didn’t translate to a hot start Saturday. The two were friendly and chatty on the first tee box, but once play started, both went into battle mode — and not by choice. On the first hole, McIlroy blocked his tee shot, blocked his second shot, whiffed his chip and made bogey — and he beat Fleetwood, who needed one chip and three putts to get off the hole. This was March Madness; suddenly 25 players were within four shots of the Players lead.

“It was a battle for both of us, we had to grind it out,” Fleetwood said. “But no, I really enjoy playing with him. You get certain people that you feel really comfortable with and that you enjoy playing with. Rory is one of them for me.”

Midway through the round, both had righted the ship. McIlroy rallied through the teeth of the course, making impressive birdies at 7 and 8, the second and third hardest holes of the day. Fleetwood rallied later but just as effectively; he played his last 11 holes in five under, including a kick-in birdie at No. 17. The cool, grey skies were windy early and threatened rain — leaving Fleetwood in an oversized pullover that commentator David Feherty uncharitably described as “like a homeless person robbed a Nike store” — but calmed late in the round, in time for birdies aplenty. 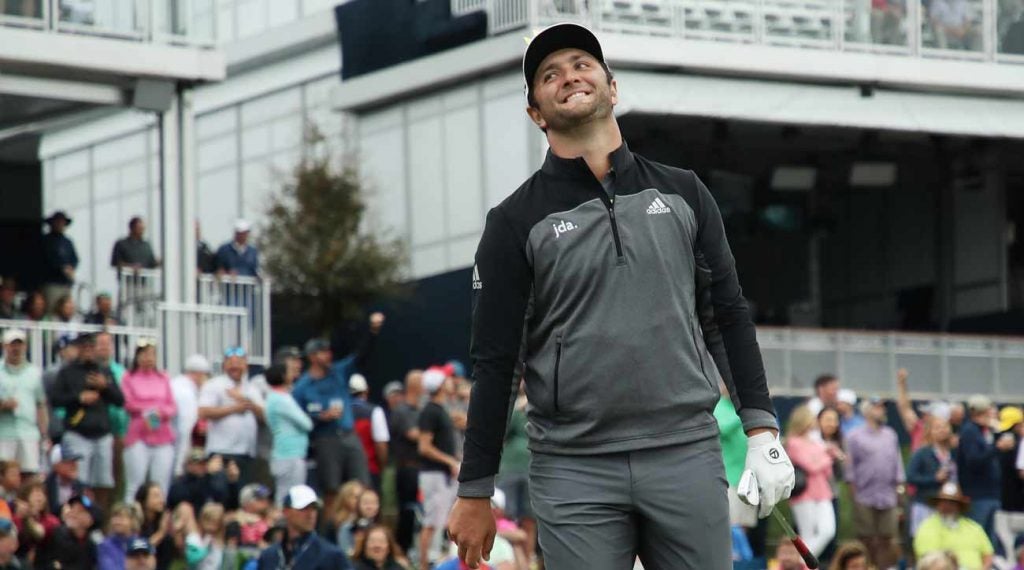 Jon Rahm charged into the lead on Saturday at the Players.
Getty Images

If the day started a two-horse race and turned into a free-for-all, it finished as some sort of in-between. That was thanks to the heroics of Jon Rahm, who got hot and fired an 8-under 64. That effort, which came as a function of four birdies and an eagle on a red-hot back nine, took him from five shots back into the solo lead at 15 under.

He was thrilled with his round, but knew, just as Fleetwood and McIlroy did entering Saturday, that things were far from finished — especially with a sketchy forecast. “We could be playing in really heavy weather, wind or rain, we don’t know what’s going to happen and we don’t know what the golf course is going to play like,” Rahm said.

Fleetwood (-14) will join him in the final pairing, while McIlroy (-14) will join Jason Day, who sits alone in fourth at 12 under. Abraham Ancer sits one shot further back, and then it gets really messy: six players are tied at 10 under, hoping for a charge. Despite both McIlroy and Fleetwood firing 70s to post 14 under, Fleetwood drew the tiebreaker to play in the final round. One reporter wondered in the post-round press conference: why?

“I think I’m the better looking one, so they put me in the last group,” Fleetwood said, characteristic twinkle in his eye. But then he checked himself; to the public eye, Fleetwood is humble and then mischievous, always in that order. “Okay, so it wasn’t the looks. Rory would be in the last group if that was the case.”