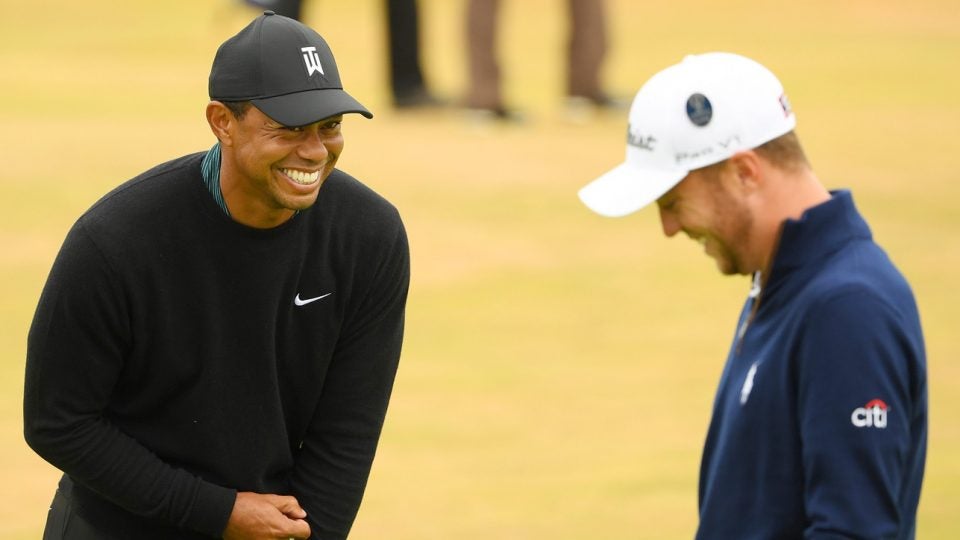 Tiger Woods and Justin Thomas share a laugh during a practice round at the 2018 Open Championship.
Getty Images

Tiger Woods turned 43 years old on Sunday, December 30, capping off an incredible year that saw him return to the elite ranks of the PGA Tour, and perhaps kicking off an even greater year to come. Many of Tiger’s fellow pros took to social media to wish the veteran a happy birthday, with some taking the opportunity to to make some well-meaning jokes about his age.

Among those sending birthday greetings to Woods were two young stars of the game Bryson DeChambeau and Justin Thomas. In an Instagram post, Thomas expressed his gratitude to the friendship he has built with Tiger over years playing on Tour and on U.S. teams together. But he was also bold enough to take a dig at the 14-time major champion’s advanced age.

Happy birthday to the old man @tigerwoods! Been very appreciative of the friendship we’ve created over the years. There was nobody I looked up to more growing up than TW. We’re all happy to have him back and healthy 👊🏽

Other pros went in a more reverent direction, with several players thanking Woods for inspiring their careers and for what he’s done to improve the game of golf, such as Billy Horschel and Willy Wilcox.

Happy Bday to the greatest player I’ve ever seen play the game of golf! @TigerWoods. I can’t thank you enough for what you have done for the game of golf. You were one of my role models growing up and I’m lucky I’m able to call you a friend. #GOAT 🐐 #43

Joel Dahmen went as far as to say “I hope you win every major for the next 5 years,” before adding, “I have a job because of you.”

Happy Birthday and thank you @TigerWoods for all you have done for the game of golf. I hope you win every major for the next 5 years. I have a job because of you.

Woods marked the occasion on his own Twitter feed, where he thanked everyone for their kind words and support during his comeback. (He also plugged the ESPN documentary about his career that premiered at 9 p.m. on Dec. 30.)

Thanks for all the birthday wishes. It’s been an amazing year. Return of the Roar is airing on @espn tonight at 9 p.m. ET. The support from my family, friends and all of you were instrumental in my return to competitive golf. pic.twitter.com/LA24qeUL2W

Here are a few other messages pros sent to Tiger on his big day.

Happy birthday @TigerWoods from the Stricker family! It’s been a fun ride over the years. Appreciate your friendship! pic.twitter.com/bSfEw3WOLZ

Having the opportunity to play with the GOAT when he wore a red shirt was unbelievable. Happy Birthday @TigerWoods pic.twitter.com/JaYMiMQryS

We have yet to hear when Woods will hit the course again in a PGA Tour event to begin the new season, though he has stated that he will play less this upcoming year. It was also confirmed last week that he will skip this week’s season-opening Tournament of Champions in Hawaii.