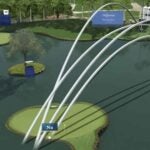 Kevin Na miraculously made a quintuple-bogey 8 without making a single putt.

It’s an annual Players Championship rite: dozens of the world’e best players walking away with double (and occasionally even triple) bogies on the famed island-green 17th hole at TPC Sawgrass.

This year’s Players has proven no different, with the closing stretch on Pete Dye’s famed design proving as toothy as ever. Perhaps no player knows that better than Kevin Na, whose no-good, very bad Thursday was compounded in remarkable fashion on the 17th.

Na walked down the valley toward the 17th tee at three over for the tournament. A birdie on No. 17 would leave him on the outskirts of contention, but firmly in position to make the cut.

Instead, Na’s day imploded in soul-crushing fashion when he knocked three tee balls in the water en route to a quintuple-bogey 8.

The sequence started when Na’s initial 151-yard tee shot carried past the island green and into the water. Then, from the drop area, he knocked two more shots into the drink.

Na finally found safety on his seventh shot, his ball landing on the back fringe of the green. But that’s where things got truly interesting. On his eighth and final shot, he chipped on and holed out.

The final result? A quintuple-bogey 8 in which Na never used his putter.

But the five-time PGA Tour winner’s day wasn’t over quite yet. On the 18th, Na pulled his tee shot into the water before scrambling to save bogey.

When the dust settled, Na recorded an opening-round, nine-over 81. A few minutes later, he withdrew from the tournament with a back injury.

If there’s a silver lining for Na, it’s that he’s not alone in making a mess of the 17th. Of the 79 players who came through No. 17 as of 2:30 p.m. ET on Thursday, 12 made double-bogey or worse, and another seven made bogey. Compare that with only 15 birdies on the day, and you’re looking at a hole playing two-tenths of a stroke above par, on average, in the early stages of the tournament.