WATCH: Pro practices for a tournament, and someone steals his hole 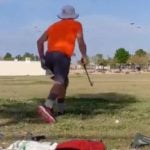 Eddie Olson takes off after a would-be thief.

Someone stole the golf hole.

While practicing for a recent professional tournament in Arizona, Eddie Olson positioned a black umbrella about 100 yards away to hit at. He took a swing in the empty field. He was about to take another.

Someone then took his target.

As he held his pose from the shot, someone jumped a fence about another 30 yards past the umbrella. Olson watched as the person walked toward the umbrella, picked it up, raised it above their head and began to walk away. Olson began to run.

“Hey, hey,” he screamed in his video shared on social media by Monday Q Info, which reports on golf’s developmental tours.

“What are you doing?” Olson added as he sprinted with a club in his hand toward the thief.

“Oh, is this yours?” the person said as Olson approached.

The video, shot from behind Olson as he swung, ended.

He finished second to Alex Cejka in the Outlaw Tour’s Parker Open – but missed winning only because Cejka rallied from a six-stroke deficit with six holes to play to make a playoff.