Just when you think you have it all figured out… Chesson Hadley would like a do-over, please. The PGA Tour pro quickly turned a long eagle opportunity into a double bogey by putting his ball off the green and into a pond at the Waste Management Phoenix Open.

It wasn’t all bad for Hadley on Thursday. He got off to hot start in the first round at TPC Scottsdale, firing a 31 on the front to make the turn at four under. When he made another birdie the par-5 13th, it looked like he had a shot at the lead.

Then everything went haywire.

Hadley made back-to-back bogeys at 14 and the par-5 15th, dropping him back to three under on the day. But after driving the green at the short par-4 17th, it looked like Hadley was about to get back on track in a big way. 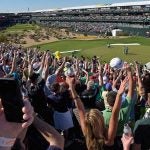 Hadley’s drive ended up on the front left corner of the green, a long way from the cup. The hole was cut on the left side of the putting surface, too, but a pond guarded that entire flank of the green.

Staring down a 105-foot breaking putt for eagle, Hadley took a mighty whack at his ball and could only watch as it ran up a swale, then broke back down it towards the water, trickling through the fringe before making a humble splash in the pond.

Watch the unfortunate putt below.

After the water ball, Hadley took a penalty stroke and a drop on the fringe. His fourth shot ended up seven feet away, but he was unable to convert the bogey save, settling for a deflating double bogey.

The double dropped Hadley to one under, and yet another bogey at the closing hole left him right where he started 18 holes before, at even par.

Hadley, a 31-year-old Tour veteran, has captured one PGA Tour victory in his career at the 2014 Puerto Rico Open. Despite eyeing the lead as late as the 13th hole on Thursday, Hadley now finds himself a full seven shots back of first-round leaders Rickie Fowler and Justin Thomas.