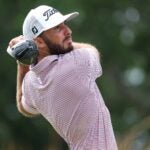 Four-time PGA Tour winner Max Homa made his stance on the state of the golf world and its ever-evolving situation quite clear in an appearance on the No Laying Up Podcast this week.

Homa, who repeated as winner of the Wells Fargo Championship in May, explained that while he’s made some of his views regarding the new LIV Golf Invitational Series public via Twitter, he has yet to really sit down and air them out like he wants to. The Tour only brings a small number of players in for pre-tournament press conferences, and Homa hasn’t had the opportunity as of late, he says. He also added that it shouldn’t all fall on Rory McIlroy to be the Tour’s primary defender.

“He should not have to do this week in and week out,” Homa said. “He’s doing an amazing job. … I think we can all help, but we all aren’t in a position to do so.”

So, when speaking to No Laying Up, Homa let loose. (We won’t transcribe the whole thing here, but check out the teaser below, which is worth a listen. The full podcast is at the bottom of this story.)

Homa said his rock bottom came a few years ago when playing in an Adams Tour event, and that when he was sitting in his hotel room he was dreaming about playing on the PGA Tour, facing off against McIlroy, qualifying for Ryder Cups and climbing up the World Ranking.

“I know money comes with a lot of that, but I never dreamt of money,” he said. “And I mean that sincerely. That was never the motivating factor. And I think that is a big part of this whole thing. You can buy a tour for sure, but you can’t buy my goals and my dreams.”

Homa agreed that the cash being thrown around via purses and to committed players was “unthinkable,” but argued golfers on the PGA Tour aren’t playing for peanuts, either. (Some of those purses, by the way, will see a major increase soon, commissioner Jay Monahan announced on Wednesday.)

“There’s this argument now that it’s playing for money or playing for trophies, and I call bull—-,” he said. “Because we play for a lot of f—ing money also.”

Homa, who has yet to play in a Ryder Cup but will likely make his first Presidents Cup debut this fall, talked about how much it hurt to get fit for a Ryder Cup uniform last year only to not be picked. The team events, he has long said, mean a lot to him.

“I just don’t know if there’s an amount of money at this moment, this week, that will get me to quit the PGA Tour and I wouldn’t get to play the Presidents Cup,” he said. “That’s what wakes me up in the morning, that’s why I practice when it’s 110 out here in Arizona. That’s what gets me and I don’t think I’m alone out here.”

You can listen to the complete No Laying Up podcast episode with Homa here.