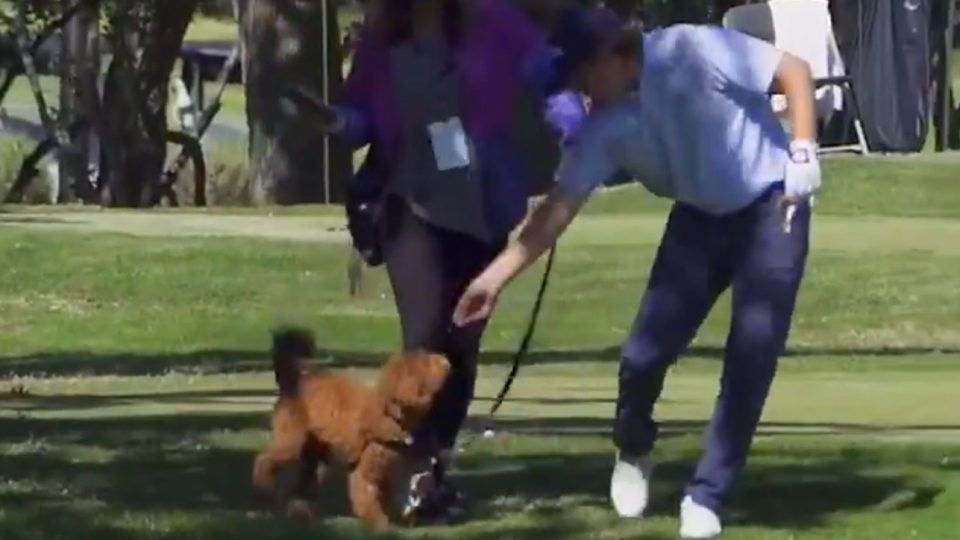 Zac Blair feeds his dog Teddy during the first round of the 2019 Dormie Network Classic.
@WebDotComTour

Dogs are not a rare sight on the golf course. Course superintendents often have canine companions working by their side. But at pro golf events, dog sightings are exceedingly rare, especially inside the ropes.

So current Web.com Tour pro Zac Blair made some waves on Thursday when he brought his dog along to the Dormie Network Classic at Briggs Ranch. But Blair’s pup didn’t just hang out on the sidelines, he walked with Blair inside the ropes throughout the first round.

Here’s a clip of Blair feeding his adorable dog after hitting a tee shot on Thursday.

Blair’s furry playing partner is a goldendoodle named Teddy, and like many dog owners, Blair seems quite enamored with his new friend.

Blair shot an impressive five-under 67 in the opening round with Teddy by his side. That was good enough to put him T26, just four shots off the lead. It was also good enough for the pro to seriously consider bringing Teddy along for every round he plays.

However, that might not be possible if he makes it back to the PGA Tour. Tour rules state that dogs and other pets are not allowed at tournaments, at least for spectators, unless they are service dogs. It’s unclear what the official rules are for the Web.com Tour.

If you’re still reading at this point, you’re clearly here for the dog pics. Therefore, in closing, may I present to you these puppy photos Blair posted last September when he first got “Teddy Bear Blair.”

Out and about chillin’ with Teddy Bear Blair today!!! If there’s a cuter pup in the world I haven’t seen it 😍 pic.twitter.com/Qf9jqitUlY