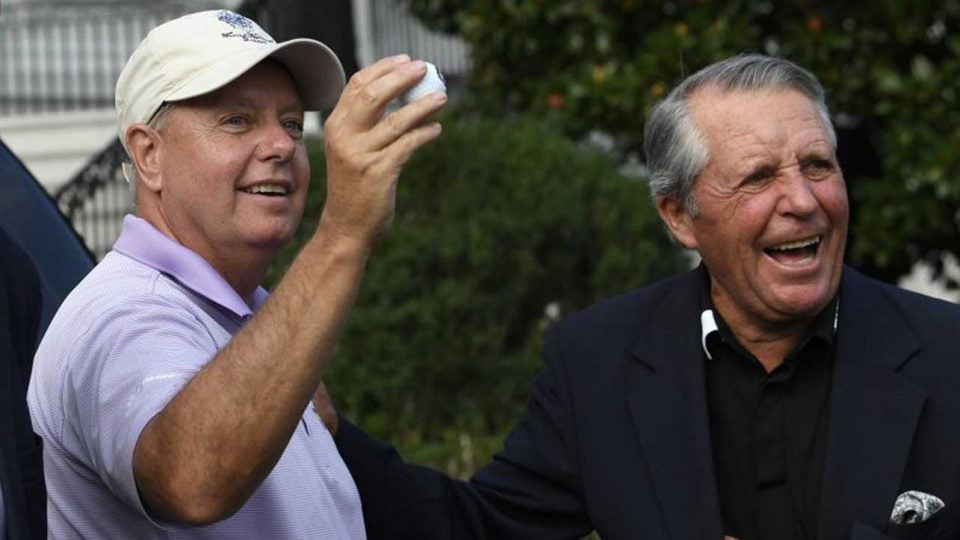 Gary Player and Lindsey Graham said they enjoyed a round of golf with President Trump on Saturday.
AP

President Trump and Gary Player took on Lindsey Graham and Annika Sorenstam Saturday in a match at Trump National Golf Club in Sterling, Virginia. But the showdown ended up relatively one-sided.

“They beat the hell out of us,” Player told the AP after the round, with a big smile.

“We defrocked the Black Knight and the president,” Graham added.

Despite a week in which Trump is facing a formal impeachment inquiry, Graham insisted that the president’s mood was positive.

“This is the most fun I’ve ever had playing golf with him. It was wonderful,” Graham said. “Playing with Gary Player and Annika Sorenstam was one of the best days I’ve ever spent on the golf course. The president was a charmingly great host, a lot of fun.”

It’s relatively rare for the White House to confirm Trump’s golf partners — or even that he’s playing golf at all — but it has done so in the past during several of Trump’s outings with professional golfers.

Politics reporter Caitlyn Byrd reported that Graham, a Republican senator from South Carolina, hoped to discuss a series of important issues with the president while on course, including Iran or finding a deal on gun control.

Other topics Graham says he wants to cover with Trump while they play golf Saturday include, "What we need to do with Iran. Maybe we find a deal on guns."

"He'll ask me my opinion and I'll give it to him," Graham said. #scpol #politics

CNN producer Nikki Carvajal posted a photo of Graham and Player after the round in front of the White House. She added that Graham described the president’s mood as “jovial” and “charming.”

Sen. Lindsey Graham, fresh from a round of golf, cheerfully told pool reporters that today with President Trump was the most fun he’s ever had on the golf course. He described the President’s mood as “jovial” and “charming”. Here he is outside the White House with Gary Player. pic.twitter.com/SdFepFCun9

Graham has become a frequent playing partner for President Trump. Player, meanwhile, has known the president for many years. He told TMZ in 2017 that he didn’t understand criticism of pros who have teed it up with President Trump.

“The thing is this. People have criticized some of the pros for playing golf with Donald Trump. Donald Trump is the President of the United States, the most important country in the world. You don’t play golf with a man because of his political views. You play golf with a man because he’s the president and you respect the president,” Player said. He added that he’s no fan of communism but he’d play with President Xi of China — though he said he’d draw the line at playing with Kim Jong Un.