If President Trump buys Greenland, the U.S. would acquire these golf courses

President Trump has expressed interest in the United States purchasing Greenland from Denmark, and whether or not that holds any merit, it’s worth discussing what such a move could mean for American golfers.

Despite being mostly under an ice sheet, there are still golf courses in Greenland that you could play tomorrow if you so wished. To be fair, it is difficult to travel to Greenland, but once that’s squared away, a round at Nuuk Golf Club is awaiting you.

Located in Nuuk, on one of the many southwestern peninsulas, NGC is right next to Nuuk Airport. Golfers with private planes can rejoice. Those without will need to get lucky via some transfers, because no direct flights from America into Nuuk exist at the moment.

Nuuk Golf Club has an avid membership, but they’re happy to open their doors for guests. For those who are hold membership elsewhere, it’ll run you 300 DKK, or about $45. What a deal! The course opened on May 25th this year, and will likely stay open through September when chilly temperatures return. The grass on NGC is called “arctic grass,” which was imported from Iceland and does not grow fast at Greenland’s very-north latitude. 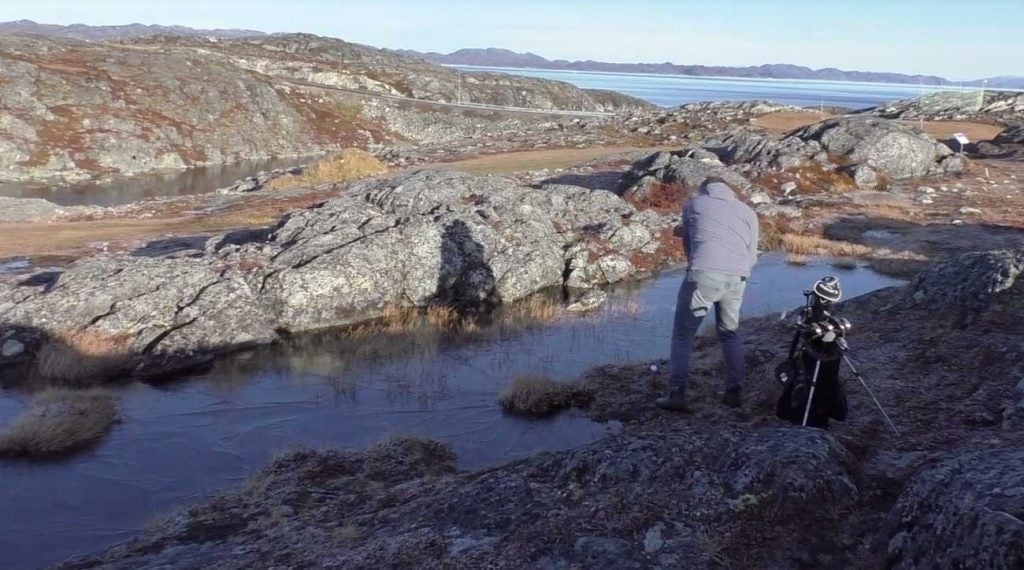 Not every lie is going to be great at Nuuk Golf Club.
Facebook.com/NuukGolfClub

As for other golf in Greenland, there is Winter Golf, best played up in Uummannaq, an island further up the western coast. Winter Golf takes place in an extended period around the classic winter months, November through March, before warmer temperatures render the icy course not-so-icy.

The Uummannaq course, which is laid out on top of the local port, changes every year depending on the movement of the many local icebergs. The port stays frozen until mid-May and then refreezes again for play by the end of November, leaving locals and visitors a new golfing challenge each year.

There is more than five miles of space for the course, leaving plenty of room for a regulation length nine-hole course with two par 3’s, one par 5 and four par 4’s. The course, which is governed by the Danish Golf Union and the Royal and Ancient of St. Andrews, Scotland, is laid out in meters with some special local rules.

The many icebergs, which dot the layout, are treated as ground under repair and golfers are given a free drop with no penalty. The balls themselves are orange to stand out from the miles of white ice and snow and brooms are provided on each green to sweep off your path to the hole. The holes themselves may also be cleaned out from the blowing debris.

And one more thing, no graphic shafted clubs, as they are prone to shatter in the extreme elements.
But surprisingly, a well-struck ball off the tee will fly as far near the top of the world as it does in your regular Saturday foursome. Where it lands, either on solid ice or in a snow bank, will certainly determine its post-shot roll. Putting and chipping are another matter, as the hard-frozen greens, whites, don’t lend themselves to any feel putts. The harder the better is the key to putting success on the Uummannaq links.

It begs the question: How many other countries can offer such a unique spectrum of play as Greenland? Perhaps that is another reason for the President’s intrigue about the largest island in the world. Trump is famously, and even infamously, an avid golfer with his own golf course business.