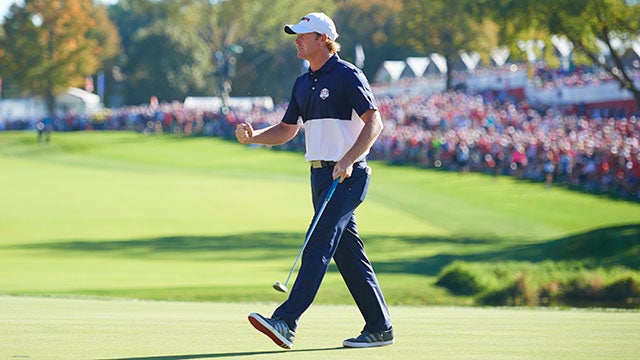 Short tied for fifth at the Cricket Club, and at 52 will tee it up in his first Open.
Getty Images

Four golfers—Jeff Maggert, Wes Short Jr., Bob Friend and Brad Faxon—all played last week in the senior event at the Philadelphia Cricket Club in Flourtown, Pa., and then made the cross-state trek to Oakmont, outside Pittsburgh, for this week’s U.S. Open. The five-hour drive gave them the chance to experience something Neil Oxman, who is Tom Watson’s caddie, says about his home state: “Pennsylvania is Philadelphia and Pittsburgh with Alabama in between.”

That of course is an observation, but this is a fact: No state has hosted more USGA events than Pennsylvania. This week’s national championship will bring the grand total to 84. Just in men’s U.S. Opens, Pennsylvania has 17. Your scoreboard totals: Oakmont, 9; Merion, 5; Philadelphia Cricket Club, 2; and Philadelphia Country Club, 1.

Oxman, a political strategist in his day job, is a member of the Cricket Club, as am I. We are both proud of how our old A.W. Tillinghast course held up over the four days of the Constellation Senior Players Championship.

How fun to see Loren Roberts, who was in the three-man playoff in the Open at Oakmont in ’94, sitting in our converted barn, now a locker room, watching the play live on Golf Channel and talking about how, 22 years ago, Oakmont was playable. “Five under played off,” Roberts said. He and Colin Montgomerie and the winner, Ernie Els, were the minus fives. If anyone shoots five under this week, I’m guessing, they’ll win by at least a field goal and more like a touchdown. (It’s Pittsburgh: start your football metaphors.)

While Roberts chatted, Montgomerie was doing his post-round pack-up. In the Sunday finale, he was paired with David Frost and Mark Brooks, followed by a former club Cricket Club president, Wally Evans, who was faithfully recording each shot played by the group. (Where would professional golf be without free labor?) Wally was amused, if that’s the right word, to see what is a regular occurrence in professional golf: the Monty Huff. He holes out as fast as he can, harumphs his way to the next tee while his playing partners finish up, and fantasizes about the game in his native Scotland, where golfers are taught to get on with their business. Nobody in golf does grumpy like Monty. It’s a treat.

It did not help that the wind blew warm and heavy for three of the four days and that the greens were firm and fast. The rough, in places, was close to unplayable, and a creek meanders through the course. In other words, the fellas were playing a proper golf course last week. Poor Ernie. He’s too young (by four years) to have played the Cricket Club last week. He was stuck preparing for Oakmont by playing in the FedEx St. Jude Classic at TPC Southwind in Memphis. Maybe it’s a good course, I don’t know. On TV, it looks like another development course. Tillinghast, at the Cricket Club, didn’t have to allow for housing lots. He did his Cricket Club work on rolling, heaving land that must have been screaming to him, Golf course here! We’re no TPC. We are just another Pennsylvania farm course. Oakmont is, too.

The Ponte Vedra marketeers are always selling, selling, selling. Selling and branding. The current name for the 50-and-over tour is now officially and grandly the PGA Tour Champions, and the Senior Players is one of the five Ponte Vedra-sanctioned senior majors. This is nonsense. The senior tour is the senior tour. It’s the grind-it-out tour, whether you’re a Hall of Famer like Bernhard Langer or a journeyman’s journeyman, like Wes Short. As for the Senior Players Championship as a major, it’s not. The players will tell you that, although not with a microphone in front of them. They know what the public knows, that there are three senior majors: The U.S. Senior Open, the British Senior Open and the Senior PGA Championship. Most of the other events are glorified corporate outings with little spectator interest.

Langer, who won the Constellation Senior Players Championship, is 58 and a Hall-of-Famer, but he is also a classic grinder. (Other Hall-of-Fame grinders include Hale Irwin, Tom Kite and Ben Hogan, but not Arnold Palmer or Ernie Els or Sam Snead.) Langer shot a final-round, through-the-wind 73, three over par, without making a single birdie, for a four-round total of 281, which gave him a one-shot win and a winner’s check in the amount of $420,000. If that’s not grinding it out, nothing is. Exciting it was not. Oakmont is not likely to be exciting either, but the stakes will be higher.

Short, a tough Texan and a veteran of the mini-tour wars, would probably be embarrassed if you called him a champion. At the Cricket Club, he described with pride how he tried to qualify for the U.S. Open 25 or 30 times before finally making it through a 36-hole qualifier last week, at age 52. He finished three shots behind Langer at the Cricket Club.

Short will be the oldest player at Oakmont, 10 weeks older than Maggert, who got in the field as the reigning U.S. Senior Open champ. One nice thing about the senior tour is that many of us of a certain age have a history, of a kind, with the players. I remember sitting with Maggert for hours at the Kemper Open in 1999 as he talked about the wrenching decision to leave his wife and the mother of his children and start a new life. It was kind of wild. The general response from our readers was along the lines of, I always thought Maggert was so . . . dull. Uh, no.

Bob Friend, the son of the former Pirates pitcher, will be at Oakmont. He is a member of the club, grew up playing there and, at 21, was the club champion. He won by 13 shots and was encouraged by Bob Ford, who was Oakmont’s head pro, then and now, not to defend his title. “You have moved on,” Ford told him. Friend is not exempt on the senior tour, but he got in last week off the alternate list and finished 72nd.

And then there was Faxon. He will be in the broadcast booth for Fox, but after shooting a final-round 70 on a tough scoring day at the Cricket Club and driving it long and in play, Faxon couldn’t wait to tee it up again. I’m sure that Sunday play was his highlight of the week.

The highlight of the week for me came Thursday afternoon, when Faxon made the short drive from the club’s Tillinghast course, in suburban Flourtown, Pa., to our nine-hole course, called St. Martins, in the city limits of Philadelphia. St. Martins is a remnant of the short 18-hole course that was the site of two U.S. Opens, in 1907 and 1910. It’s a quirky delight with some of the most interesting greens you’ll see anywhere. It’s not for everyone, but Faxon, a purist’s purist, thoroughly enjoyed it. He noted immediately how unusual it is to see zoysia grass fairways as far north at Philadelphia. It’s a warm-weather grass you’re more likely to see in, say, Alabama. It was planted by the Cricket Club’s brilliant grounds director, Dan Meersman, who in his eight years at the club has overseen the restoration of both the St. Martins course and the Tillinghast course.

“I heard that nine-holer is really good,” Roberts was saying on Sunday night. “So it was 18 holes when they had the Open there?” Yes, it was, both times won by a Scotsman: Alec Ross, Donald’s brother, in 1907, and Alex Smith.

It is customary for visiting pros to say nice things about the host course and even at Oakmont you’ll hear players say things like, “Well, it’s fair.” Gary Player, forced to compliment courses he did not like, used to say, “It is the finest course of its kind!” Last week at the Cricket Club, the players were effusive about the course, which played harder than it is because of the strong winds. Pros were saying the course could handle any event in golf. Well, we are getting the USGA Four-Ball in 2020. It will be the USGA’s 88th event in Pennsylvania. That will be nice for the club and for the competitors, but I take more pleasure from what Roberts said to me on Sunday night: “Why would you want to play anywhere else?”