Patrick Reed is going all out in an attempt to clear his name of the cheating and theft allegations during his time in college that are marring his reputation. But in the process, more people are siding against him, and Reed’s defense strategy seems to be backfiring.

In addition to a Golf Channel interview with Todd Lewis after the final round of the WGC-Cadillac Championship at Doral—in which Reed denied the allegations but did admit to involvement in two alcohol-related offenses—Reed has obtained what his team is calling “affidavits” from two of his former coaches.

However, the “affidavits” are nothing more than signed statements. The documents Reed obtained from Georgia coach Chris Haack and Augusta State coach Josh Gregory are not notarized for use in court and thus do not qualify as “affidavits,” according to Stephanie Wei, who obtained the documents.

What’s more is that the note from Haack, shown above via Wei, does not clear Reed of any allegations and states only that Reed was dismissed from the team for other reasons, and that Haack was unaware of any cheating/theft allegations “while Patrick Reed was at UGA.”

Reed himself admits in the video that the alcohol-related offenses led to his dismissal, and that “none of that stuff is true.” But what exactly Reed is trying to disprove is a point of confusion.

The issue originally arose after author Shane Ryan published an excerpt from his upcoming book entitled, “Slaying the Tiger: A Year Inside the Ropes on the New PGA Tour.” In the book, Ryan brings to light concerns that Reed cheated in a team qualifying round at Georgia and stole from his teammates. Reed ultimately left Georgia for Augusta State.

But as Wei notes in her story, Ryan’s excerpt never alleges that Reed’s dismissal from school had anything to do with the cheating/theft allegations. After summarizing Reed’s experience at Georgia, Ryan writes: “It was understood that Reed would transfer for his sophomore season.” 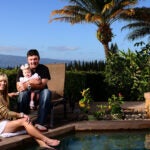 You may also like Dynamic duo: Patrick Reed and wife Justine are the PGA Tour’s Dream Team

Even once Reed landed at Augusta State, where he helped the team to back-to-back national championships, the issues did not cease. And now that Reed has publicly tried to clear the air, a few of his former Augusta State teammates are publicly siding against him.

Wie notes that the tweet was retweeted by three of Reed’s teammates from Augusta State, suggesting that the team is backing Ryan’s reporting. In addition, Wie has a statement from Jason Payne, the assistant golf coach at Georgia during Reed’s time there, that contains the following:

“While getting to know Patrick through the recruiting process as a coach, a few character issues came to light, that we as coaches thought we could help Patrick with. Once Patrick was on campus for a few months, it became clear that Patrick was not going to mesh with the make up of the team at that time, and he was dismissed from the team. There is no doubting the ability of Patrick as a golfer, it was Patrick as a person that we chose not to associate with. The story that has been reported by Shane Ryan is an accurate account of his college career at UGA—including the suspicions held by his former teammates.”

Reed is a long way from achieving his goal of a retraction from Ryan. And it seems as though there are plenty of people (namely Reed’s former teammates) willing to help solidify the accuracy of Ryan’s reporting.