PALM HARBOR, Fla. — Patrick Reed has not looked his Masters-winning self in recent days. Last weekend, he closed out an otherwise stellar Players Championship campaign with a fourth-round 78. On Thursday, here at the Valspar Championship, Reed made three double-bogeys on his way to an opening-round 77. So it was no surprise to see him grinding on the range before his second round at Innisbrook’s Copperhead course on Friday morning.

What was surprising was the instructor at his side: David Leadbetter.

With Reed’s swing out of sorts, Justine Reed — Patrick’s wife and former caddie — put in a call Thursday to enlist the services of the renowned swing coach. Leadbetter was game to assist, which led to his and Reed’s almost-90-minute session at Innisbrook. 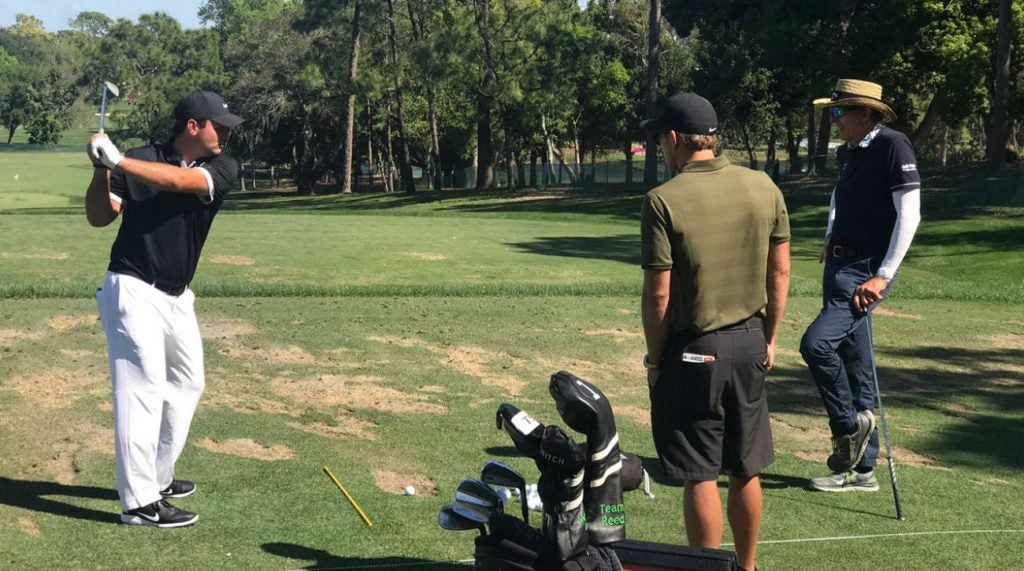 Patrick Reed had a consultation with Tour guru David Leadbetter on the range at the Valspar Championship this past Friday.
Twitter: @JohnstonGarrett

After observing Reed, Leadbetter told the media that he felt Reed’s swing was getting too long, which had also been Justine’s concern. “I wouldn’t say Bubba(ish), but very long,” Leadbetter said.

Reed has worked with two other coaches for several years: Kevin Kirk (since 2012) and Josh Gregory (since the end of 2015).

Leadbetter was unsure whether this session with Reed would lead to more consultations. “You never know with these guys,” he said. “He seemed to like it, so we’ll see how it goes. Today was the first time I’d really met him.”

Gary Koch, the NBC analyst and six-time PGA Tour winner, said of Reed’s emergency meeting with Leadbetter: “Doing this with another coach this close to the Masters shows the sense of urgency Reed’s feeling. I don’t recall in my time seeing this happen in all my years I’ve been watching the Masters.”

Leadbetter said he also couldn’t recall a reigning Masters champion soliciting swing advice just weeks before his title defense, but said, “It was not open-heart surgery today, just something small that we worked on.”

When Reed started his second round at the Valspar at 1:14 p.m ET., he was 12 shots off the lead. He is paired with Henrik Stenson and Sergio Garcia.

He has not won since claiming his first major title at Augusta National last April.