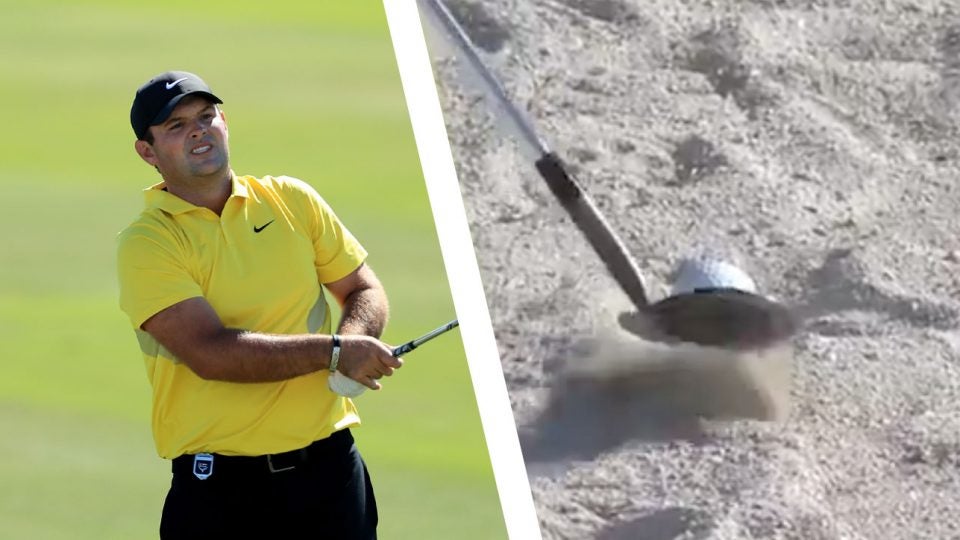 Reed was found moving sand from behind his ball while playing the 11th hole.
Getty Images

NEW PROVIDENCE, Bahamas — Patrick Reed said he believed a camera angle was to blame for a rules controversy that took over the third round of the Hero World Challenge. Reed was penalized two strokes for a violation of Rule 8.1a(4) for improving his intended line of play.

While Reed prepared to hit his second shot at the par-5 11th hole at Albany, Golf Channel cameras captured his club brushing sand from behind his ball during multiple practice swings. His ball was sitting down in the sand, and the action looked on TV like an attempt to improve his lie.

Reed, who held a three-stroke lead entering Friday’s third round, went on to make bogey on the hole. He didn’t raise the issue of a potential penalty and said he was unaware of the possibility of being penalized until after his round. Once he entered the scoring area, Reed sat down with PGA Tour rules officials and ultimately accepted a two-stroke penalty, changing his score on the hole to a triple-bogey 8.

Reed spoke to reporters after his round.

“It’s unfortunate because even though they weren’t, I wish [the cameras] were actually directly on the side of me, because it was in a pretty good footprint but the footprint was a full footprint,” Reed said, describing the ball as being at the front of the footprint. “I felt like — I mean, my club was that far behind the ball when I was actually taking the practice stroke, which I felt like I was taking it up and it was — obviously, it was hitting a little sand. I didn’t feel it drag. But then whenever you do that, if it does hit the sand, just like if you’re in a hazard area and you take a practice swing and it brushes grass and the grass breaks, it’s a penalty. Whenever they brought it up to me and I saw it, it definitely did drag some of the sand. Because of that, it’s considered a two-stroke penalty.

“I didn’t feel like it really would have affected my lie, I mean every time I get in the bunker I’m scared to even get my club close to it, it was that far away, but whenever you do that if it does hit the sand, just like if you’re in a hazard area and you take a practice swing and it brushes grass and the grass breaks, it’s a penalty. So because of that and after seeing the video, I accept that, and it wasn’t because of any intent, I thought I was far enough away.”

Reed added that with a different camera angle, he thought the ruling may have been different.

“I think with a different camera angle they would have realized that if it was from the side you would have seen that with the backswing it was not improving the lie because it was far enough away from the golf ball,” Reed said. “But after seeing that camera angle, because it brushed the sand it was a penalty.”

Rule 8.1 concerns Player’s Actions That Improve Conditions Affecting the Stroke, and the specific violation concerned 8.1a (4), which reads as follows:

A player must not take any of these actions if they improve the conditions affecting the stroke:

4. Remove or press down sand or loose soil.

PGA Tour Rules Official Slugger White met with Reed to discuss the penalty after his round. “He could not have been more of a gentleman,” White said. “He was unbelievable. He said — he had a different look at it. The angle that we had was behind and he’s looking from on top, so he may not have — I don’t know if he could have seen it as clearly as we did, but he could not have been a better gentleman.”

Reed said that his intent was not to improve his lie or line of play.

“I told [White] it wasn’t intent and that I was far enough away from the ball, but because they didn’t have another angle, they can’t say anything either way. At the end of the day, because of where the camera angle was, they felt like it might have been improving the lie.

Because of the penalty in question, White said Reed’s intent didn’t actually matter — only whether he had improved his intended line of play.

White clarified that had the penalty occurred during the final round, rules officials would have notified him immediately. “I would have probably gone to him on 12 or 13 because I don’t — it might affect the way he finishes the round. But today, I just didn’t feel like that was the proper way to go.”

Reed went on to birdie three of his final five holes to post a round of 2-over 74 that leaves him in solo sixth at 10 under. He says he intends to move on from the incident and focus on his final round Saturday.

“At the end of the day, you’ve got to let things kind of roll off your shoulders, and also at the same time I still have a whole other round to play tomorrow,” Reed said. “If I stew over something that I felt like I didn’t intentionally do, at the end of the day, it’s my word versus their word, and they weren’t standing there, they had a camera angle. So because of that, you know, you don’t really have a choice.”