Paige Spiranac: Here’s why I decided to pose for the Sports Illustrated Swimsuit issue

Social media sensation and professional golfer Paige Spiranac will make her debut in the Sports Illustrated Swimsuit issue in 2018.

Spiranac, 24, who initially made her name in golf circles as a trick-shot artist, has played in a handful of professional tournaments. She won a Cactus Tour event in 2016 and played in the Dubai Ladies Masters in 2015. She also works with Cybersmile, a nonprofit against cyberbullying, and was the subject of a Sports Illustrated profile in 2017. Just moments after seeing the photo shoot published online, Spiranac caught up with GOLF.com to talk about the Swim experience and why she decided to pose for the issue.

So you’re in the 2018 issue of SI Swim. Why did you decide to participate?

I think the question is more “Why not?” Sports Illustrated Swimsuit is iconic. I’m so honored and humbled to be included. I’m still shocked to be completely honest. But they stand for everything I believe in, which is empowerment of women, body positivity, being able to love yourself for who you are. They allow women to feel sexy if they want to feel sexy no matter what they look like or what size they are. I think that’s an attitude that everyone should have.

Were you happy with how the photo shoot came out?

There are obvious differences between this shoot and others you’ve done. Did it feel much different? What was the experience of the shoot like?

It’s probably a shocker to most of the golf readers but this was my first swimsuit shoot. I think people do them like week in, week out but it was my very first one so I didn’t know what to expect. I’ve done golf and fitness shoots, but in those I’m still fairly covered up. I didn’t know what to expect, so I was working out really hard in the gym, I got a spray tan. I prepared way differently for this one, but it was so cool to be out there. Usually in the golf shoots, it’s always, “Let’s button up a couple more buttons. Let’s pull the skirt down a bit more and keep it conservative.” For this one it was, “Let’s take off more!” It’s just a strip of fabric. It was so cool to be out there and feel so empowered. This is my body, let’s embrace it. Everyone on the shoot was so great the entire time and made me feel so comfortable. It was the first time I ever felt comfortable on a shoot. I love myself and I love my body. It really changed my outlook. Just realizing I need to be a more confident person and I need to believe in myself more and that it’s okay to feel sexy if I want to feel sexy.

Your place in the game seems to have changed in the past year. Who is Paige Spiranac right now? Are you still an aspiring pro? Do you consider yourself more of a brand ambassador? A philanthropic influencer?

Golf is really tricky. I feel like you either have to be a broadcaster, or a professional golfer or a golf instructor. If you’re not one of those things you don’t really fit in the game. I don’t really fit into any category at the moment. I played professionally for about a year so I say I’m a professional golfer because I can’t get my amateur status back. I’m still a professional golfer but I don’t have a passion to pursue playing professionally right now. I do media work but I don’t do broadcast on TV. I’m a content producer and creator, so I just go out there and produce awesome content. I don’t have a spot in golf right now and I think that’s totally okay. I think I’m bringing new people into golf and people that might not even know what golf is. So maybe I’m an ambassador for amateur golfers, who knows. I’m still trying to figure out where I stand and I’m happy about the content I’m creating right now. I don’t know if I’ll ever be fully accepted in the golf industry because what I do is so different and no one has really ever done it before. People don’t know what to call me or what I’m doing, but I feel like I’m having a positive impact on the game.

Do you feel you are a role model? If so, who do you think might look up to you?

I have a lot of dads who reach out to me and say they have a young daughter who doesn’t feel quite accepted in the golf world and she doesn’t want to play anymore. But she started watching my videos and now has someone who she can look up to who might look more like her or dresses the way she does. I feel like maybe I’m a role model for the misfits in golf, for the people who feel like they don’t fit in or that they conform to the golf standard, or feel different. I don’t like the word “role model,” I like to be more of a mentor. I like to be more side-by-side with them instead of ahead of them. If someone reaches out to me, I’ll always reach back out to them. A lot of my followers have become my friends now because we have that relationship of — you know, they ask me questions and I ask them questions, and we’ll go through this process together.

When did you realize you could use your following to have an impact on others?

I would say, realistically, last year. I started to find my place a bit more. I understood how powerful social media is. People still think today that social media is kind of silly. Not as serious. Now I see social media as a massive platform. Companies are now using it as their main marketing tool and a wave for the future. I’m already kind of ahead of the curve and can use my platform for good. Being an ambassador for CyberSmile, the anti-bullying organization, I can have a direct impact on people. I use my platform to share my messages of positivity, which I think sometimes is lacking on social media. It’s a lot of negativity right now. More people are using it to share their stories and use it for good. Social media is a tool to share — share what you’re feeling, what you’re going through. We can create change. It’s really exciting. I see a lot of good happening on social media. It’s cool to be a part of that as well, to use this movement as a way to encourage people to be nice and speak out about what they want and to have a voice. 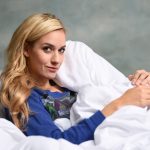 You tweeted that 2017 was the first year you were truly happy. Why was that?

I’ve struggled a lot with depression and anxiety. When I was trying to play professionally for that year I was playing to prove to other people that I didn’t suck. I wasn’t doing it for myself. I was constantly out there. Even when I won on the Cactus Tour, people cut me down. Everything I tried to do, everyone was just cutting me down constantly. I felt like I could never win. Once I stepped away from playing and realized what I was most passionate about — which is helping people — I’m happy now. I’m so happy I can go out there and help other people.

Trust me, I was so nervous to see golf media or other people the golf industry’s reaction to me doing Sports Illustrated. I know what they’re going to say. I read the comments on Facebook, and they are disgusting. They are absolutely vile comments and they rip me down constantly. But now I know in my life that I’m out there, I’m speaking to young girls and boys. I’m having an impact on people and can stand by that 100%. They can call me any name in the book, but I know that I’m doing the right thing. I’m proud of that, and my parents are proud of me and my friends are proud of me. That’s what really matters. Not some person who says I don’t deserve anything because my skirt is a little too short. That doesn’t matter anymore. It matters that I’m going out there and I’m making a positive impact and being a positive person.

Gosh, I don’t know. I’m on this crazy journey right now. I’m only two-and-a-half years into this career. I’m just excited to keep growing on the cyberbullying and making a difference with that. Also, creating really cool and fun golf content to get people more involved. To make golf more inviting, more friendly, more inclusive. Just trying to do some good and have some fun while doing it. People are way too serious right now. I think people just need to relax and think that golf is a game, it’s supposed to be fun. I know I’m always going to get hate from a certain group of people within the golf community, and that’s fine. I know what I’m doing is right.

If you could go back to the college-senior version of yourself, to give her one bit of advice on how to handle the future, what would that be?

I’m 24 right now and still don’t think I have anything figured out. I think I need 50-year-old me to give me advice, to be honest. I think I would tell my younger self to just not take things so seriously. If someone has a problem with you or if you get hate, don’t let it bother you as much as you did. I would also say that playing professionally maybe isn’t the right task for you and that’s okay. Don’t be so hard on yourself. Don’t think of yourself as a failure because you can’t play professionally. There are other things you can do in the golf industry and other ways to help people. Focus on that and less on being a failure in life.

For more on Spiranac’s appearance in SI Swim, click here.