The Old Course at St. Andrews is deserted except for a former champion and his dog 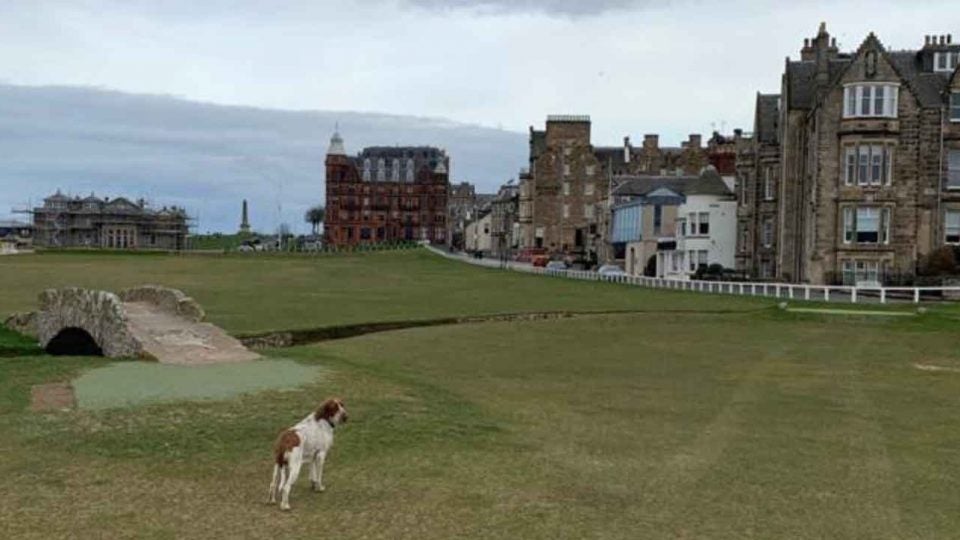 Just over six months ago, Victor Perez sat atop the Swilcan Bridge at St. Andrews with a trophy in his hands and a wide smile on his face after winning the Alfred Dunhill Links Championship, his first European Tour title.

On Saturday, his dog approached the famed bridge without another soul, four-or two-legged, in sight.

“The Home of Golf” has been among the casualties of the global coronavirus outbreak, shutting down all of its facilities on March 23. Perez managed to get on — though armed with just a scorecard and a yardage sheet and joined by his brown and white friend.

“‪We can’t play, but we can still prepare ?‬ ‪I had a fun time today reliving my first @europeantour win while getting ready for the next time we tee it up @thehomeofgolf ? #StaySafe#OneDayAtATime @dunhilllinks,” Perez posted to his Twitter and Instagram accounts.

We can’t play, but we can still prepare 📝

I had a fun time today reliving my first @EuropeanTour win while getting ready for the next time we tee it up @TheHomeofGolf 😍 #StaySafe #OneDayAtATime @dunhilllinks pic.twitter.com/7ywHolISGy

The photo of his dog near the Swilcan Bridge, one of three he shared, was the most striking.

St. Andrews is still allowing people to walk its fairways. But there is no golf. In Perez’s photo, no one is near the clubhouse, and there are only a handful of cars on the road along the 18th hole.

“Thanks to our dedicated team at the Links, we have sought to remain open for our community to continue to exercise in a safe space,” St. Andrews said in a release. “We look forward to reintroducing our facilities as soon as it is safe and appropriate to do so.”

Last September, the scene at the 18th was quite different.

Perez held a one-shot advantage following his par and Matthew Southgate’s bogey on the Road Hole 17th. Both made 4 on the last, and Perez eventually walked to the bridge with his trophy. All of it unfolding in front of a healthy gallery.

“It was a great win for me, and it showed me that I can do it,” Perez said after his victory. “Now the question is: How much can I replicate that moving forward. Obviously when you win, you want to ride the wave a little bit. …

“The people here love golf — it’s all about golf. It’s just the passion for the game.”