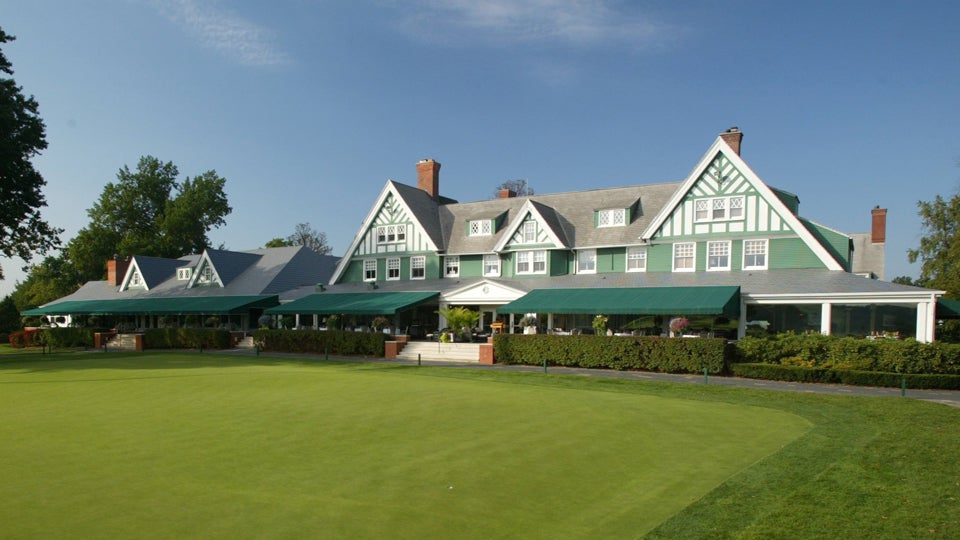 Oakmont Country Club is about to host its ninth U.S. Open, but the club's members have their own major every summer, which they call the President's Cup.
Getty Images

What’s it like trying to win the club championship at arguably the hardest course in the world? Ask the guys who have been there. That’s if they are mentally, and physically, healed to talk about it.

For the entire summer of 2014, Brett Bergman thought about the tournament he didn’t win.

Playing arguably the most difficult golf course in the world, nerves kicked in on the 16th tee of the final round. He finished double bogey, double bogey, bogey and missed a playoff by one.

“What I didn’t know at the time,” says Bergman, now 29, “was that I had a five-shot lead with three holes to play.”

Oakmont Country Club’s club championship, known as the President’s Cup, will make any golfer’s stomach churn. It’s the biggest tournament of the year at one of the most famous courses in the country that is world-renowned for its difficulty.

For three days every summer, the President’s Cup, which started in 1938, brings grown men to their knees.

“This is their United States Open Championship; it means more to them than I could ever articulate,” said Eric Johnson, Oakmont’s director of instruction. “It’s not just getting together and having a fun event. Hands down they are grinding. Everyone wants to be the club champion at Oakmont.” You won’t find the winners’ names on a USGA website or Wikipedia page. There’s no cash payout. The winner gets his name on a plaque, but everyone will tell you the real prize is having a picture mounted in the SWAT room.

The SWAT room looks like conference room, but it’s so much more. Members gather there after weekly SWAT games on Wednesdays, Saturdays and Sundays. The SWAT is best ball of a group and match-play nassau against other teams. It’s played without handicaps. Decades worth of results are recorded in a book inside the SWAT room. Surrounding the room on top of the crown molding are 8″ x 11″ photos of every President’s Cup winner.

“To win this thing is ultimate in their golf career,” Johnson said. “The name on the trophy board saying they were the club champion, they are a part to history forever.”

While the course is infamous for its dispiriting difficulty, particularly its thick rough and four-puttable greens, Oakmont members play in the club championship for “fun.” At least that’s what they call it.

“A handful of guys play in it because they enjoy the challenge,” said Devin Gee, who will take over as Oakmont’s director of golf later this year, when longtime pro Bob Ford retires. “You would never hear an Oakmont member complain about the course being too hard. Never. Even with the rough right now — it’s basically five inches — you won’t hear one member walk through it and say it’s too long. They love it.”

Oakmont can be stretched to more than 7,200 yards for the Open. Member tees are around 6,400. For the President’s Cup the course plays anywhere between 6,900 and 7,100 yards while incorporating some of the championship tees. It’s not your typical club championship. Think hybrids and 4-irons into greens instead of 8-irons and wedges.

It’s set up similarly to what the pros will play next week. Same rough length, same bunkers, same lightning-quick greens, same headaches and same par of 70. (It’s a par 71 for members.) Hole locations for the final round are often the same Sunday pins from the most recent Oakmont Open. The tournament is even harder during years Oakmont hosts the Open since the already treacherous rough is longer and thicker.

“History shows that if a guy can shoot three 75s there, he wins by a few,” Johnson said. “Where have you ever heard of 15-over winning a club championship for three rounds?” Bergman is no slouch. His handicap is 0.4. He won two junior club championships at Oakmont and played four years of Division I golf at Villanova, as did his older brother, Brock. Brett was already a team co-captain in his junior year, and on several occasions he played against St. John’s star and future PGA champion Keegan Bradley.

He didn’t start playing at Oakmont until 2004, when his dad, Jeff, joined the club, and Brett and his brothers became junior members. When he turned 18, Bergman competed in the President’s Cup for the first time, and he hasn’t missed one since. His best chance to win came in 2014.

He started the final day in contention, made a 30-footer for birdie on the first hole and thought, “This is going to be a good day.” He says he was “playing phenomenal golf,” but the wheels fell off late. Blame nerves. Blame Oakmont. Blame golf. His 3-iron found the bunker on the long par-3 16th, and a thin sand shot over the green led to a double bogey — his first in more than 50 holes. A three-putt on 17 led to another double, and he closed with a bogey on 18. A par would have earned a playoff spot.

“It’s just so terrifying how quickly things can unravel out there,” said Bergman, a product manager for a health tech company. “You spend two-and-a-half days grinding and trying to hold together a round and minimize mistakes, and you blink your eye and it’s all gone.”

Bergman took the loss hard. He said he was more disappointed than angry — he knew it had slipped through his fingers. All that practice, on the course every day for at least a few hours in the weeks leading up to the tournament, was for naught. Johnson, his pain resonating across the phone, said Brett is “still crushed.”

More than 50 players usually sign up, which Gee considers a healthy number considering the difficulty of the course, its extended length for the tournament and the fact that there are no flights. Leaderboards follow groups down the stretch so players know exactly where they stand. A small crowd forms late during the final round, too, an up-close viewing of golf’s version of The Hunger Games.

The President’s Cup is usually held in late June but is moved during years Oakmont hosts the Open. This year’s 76th installment will be played in mid-July. (It wasn’t played from 1943-45 due to World War II.)

Dick Stephens has the most titles with eight, winning all of them in a nine-year span from 1959-67. Frank Souchak added seven from 1947-56, but the unofficial dean of the President’s Cup might be seven-time winner Curt Coulter, who has won in four different decades. The first came in 1987, the last in 2010.

More recently Spatz (five wins since ’03) has been the kingpin, although last year’s champ, Nathan Sutherland, has two wins since ’07.

Spatz, a 34-year-old commercial real estate underwriter, played in his first President’s Cup at 16. He calls himself a late bloomer, although a quick Google search reveals a story of a 62 he shot at a local public course at age 21, the same year he won his first Oakmont club championship.

“After that first win — I remember it very clearly — growing up as a junior member you look up to the guys who won, these super-great golfers,” Spatz said. “As a kid you look at these guys, ‘Wow, they are so good.’ It was a sense of accomplishment really that I developed my game, worked on my game to get to the point where my abilities were equivalent or better than these guys I looked up to. It was a sense of accomplishment and pride to win a club championship on one of the best courses in the world. I felt really proud to do it.”

Bergman has one thing left to say about Oakmont, and it’s about the aforementioned SWAT room. Its history, its swagger, its unique way of decorating the winners. He has no plans to quit playing in the President’s Cup; and you’d have trouble finding a member who wants to win it as badly as he does. He’s waiting for his turn to get a photo atop the crown molding, to win at the same course that crowned Jack Nicklaus, Johnny Miller, Ben Hogan, Sam Snead and Bobby Jones.

He’s had a few other close calls. Two runner-ups, several top 10s and only one missed cut. Sure, he would have loved to win in 2014, but Oakmont’s hard. Playing with all of that pressure is even harder.

“Looking back,” Bergman says of the ’14 tournament, “it was probably the most fun I’ve ever had on a golf course, because a lot was going well.”

He’ll be at the U.S. Open, too, watching the pros curse and beat themselves up on a track he and his pals play for kicks. Bergman has an outside chance of caddying, he says, if one of his buddies qualifies as an alternate.

But this isn’t Bergman’s major. His begins four weeks later. This year’s President’s Cup is July 14-16.