New Zealand Golf: No Shortage of Courses Worth Repeating 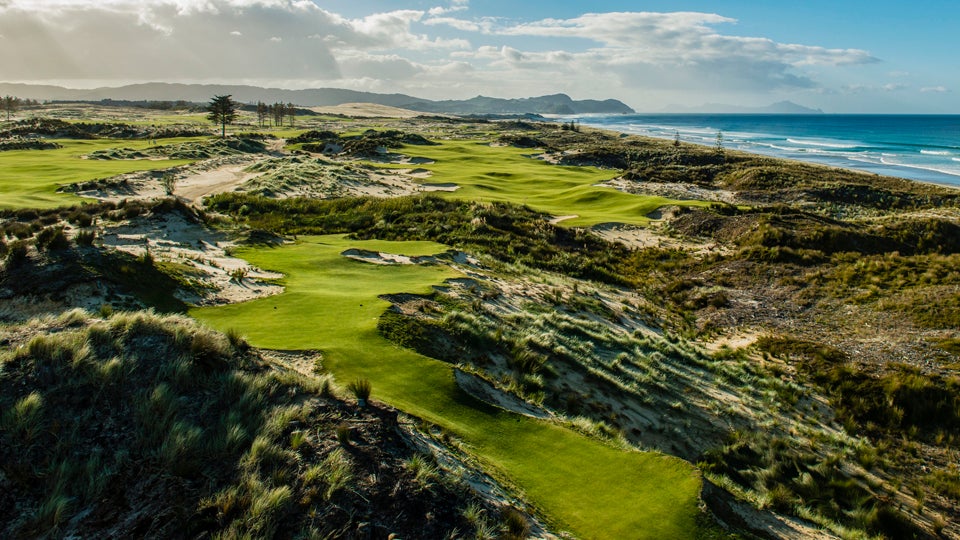 The dunes of Tara Iti are as majestic as Middle-earth.
Joann Dost

In the 2000s, anyone who watched Peter Jackson’s Lord of the Rings trilogy came away mesmerized by the New Zealand mountain scenery. Billionaire real estate developer Julian Robertson provided a similarly awe-inspiring visual experience for golfers when, in 2008, NBC aired the “Young Guns” shootout from his stunning Kauri Cliffs and Cape Kidnappers courses. That came on the heels of Kiwi Michael Campbell’s thrilling win at the 2005 U.S. Open. New Zealand was, for a time, H-O-T hot.

Now, for reasons new and old, it’s time to return. As Gandalf himself (actor Ian McKellen) said, “How can New Zealand not bewitch anyone who visits?” Here are just a few enticements to help make the 6,200-plus-mile, 13-hour trek from the U.S. west coast to the Land of the Long White Cloud a little easier.

Opened in October 2015, Tom Doak’s follow-up to Cape Kidnappers is a luxe enclave some 60 miles north of Auckland, on New Zealand’s North Island. Draped atop vast dunes that had once been blanketed by pines, Tara Iti’s fescue fairways and greens are nestled beachside, along the Pacific. With its firm-and-fast, ocean-breezy appeal, and holes of profound beauty and toughness, Tara Iti might one day be talked about as the Southern Hemisphere’s premier links. American developer Ric Kayne is intent on preserving a low-key profile for his private club. Still, he has cracked open a door for visiting overseas golfers, who may play Tara Iti once—and once only. taraiti.com

Kauri Cliffs: The world’s 94th-ranked course beguiles with Pacific Ocean panoramas and holes that peer down at the Bay of Islands.

2. PerryGolf. No tour operator has been doing Scotland and Ireland longer and better. Their experience down under is equally strong. perrygolf.com

3. Kalos Golf is the undisputed leader in small luxury golf cruises. Their New Zealand excursion is among their most popular. kalosgolf.com

4. GOLFSelect. This Aussie outfit knows the top Southern Hemisphere destinations as well as anyone. golfselect.com.au