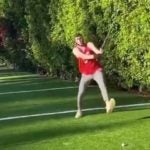 He addresses the golf ball.

Then steps back. And again. And again. He moves to his left, takes two large hops back to the ball, swings his golf club, connects and falls over backward. He sits up and pumps his fists.

“If NBA Players Played Golf,” the NBA impressionist posted on social media this week with a 98-second video.

Next is this year’s No. 1 draft pick, the New Orleans Pelicans’ Zion Williamson. Lots of power. Peranidze does a pronounced walk-in from the left of the screen, slams the golf ball to the ground, continues to walk, does a 180 and walks back to the left, giving a thump of the chest along the way. Peranidze then pivots to stand next to the ball from a left-handed stance, swings, misses and releases the club into the air before running away.

Third is the Golden State Warriors’ Steph Curry. Lots of motion. Peranidze runs in from the left of the screen and runs past a person setting a basketball pick, stops, does a 180 and runs past the person again. Peranidze pivots as the other person runs to the far right of the screen, he runs toward the person again, circles him, runs to the ball, hits it and shimmies.

“I don’t want to make players look bad,” he told The Athletic recently. “I just try to make it as funny as I can. But sometimes, making them look bad is the funny part.”