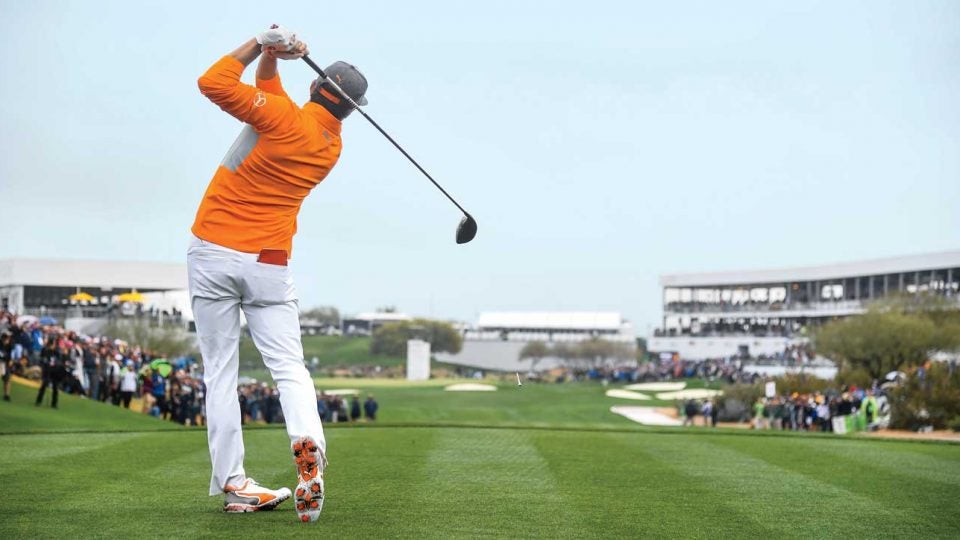 The history of the PGA’s work with charities is long, and straight from the heart.
Getty Images

Three days after Rickie Fowler won the Waste Management Phoenix Open, I stood on the 16th tee at TPC Scottsdale, cold, stiff and eager to hit my tee shot into the rowdiest par 3 in golf. As the February sun dropped behind the 50-foot-high coliseum that surrounds the 140-yard hole (163 for the pros), I could imagine the noise the Tour players had to contend with.

In total silence, I managed to thin a 9-iron onto the green and sulk off with a bogey. That, of course, is the amateur’s response: What’s in this round for me? The majority of professional tournaments on all the major tours exist with a deeper motive: to send what’s left over to charity.

With the largest attendance on the PGA Tour, the Waste Management is among the most philanthropic events. After the bills are paid, everything that’s sold — from $52,000 skybox seats around the 16th hole to tens of thousands of $9 beers — goes to Phoenix charities. Last year the tournament that seems like a giant party in the desert gave away more than $13 million to organizations ranging from local sports clubs to the Special Olympics and Phoenix Children’s Hospital.

News
With caddie scholarship programs, we can shoulder the needs of those who carry our bags

“Our goal is to promote the value of Phoenix with a heavy focus on giving back,” says Tim Woods, the 2020 tournament chairman. It is one of only seven tournaments on the PGA Tour to have given more than $100 million in its history.

Tying charitable giving to a tournament’s success began in 1938, when the Palm Beach Invitational donated $10,000 to charity. But it wasn’t until the 1970s that Deane Beman, then PGA Tour commissioner, came up with the idea to convert the Tour into a nonprofit trade organization. Following his lead, individual tournaments began setting themselves up as 501(c)(3) charitable organizations, which meant they were tax-exempt as long as they gave away the profits.

With Fowler taking home a first-place check of nearly $1.3 million — out of a purse of over $7 million — the Waste Management doesn’t seem like your typical charity, but last year, it was part of the $190 million that PGA tournaments gave to worthy causes. At some point in 2020, the PGA Tour expects to surpass $3 billion in charitable contributions.

How the money gets donated varies. The WGC-FedEx St. Jude Invitational in Memphis earmarks its charitable donations to one recipient: St. Jude Children’s Hospital. At the opposite end, the John Deere Classic gave about $14 million to 534 charities. It allows its fans to put in their own money, with a modest match from the tournament, and to select the local charities they like.

News
What’s a logo worth? Here’s why top professional golfers are in a financial league of their own

“We’re in one of the Tour’s smallest markets, so back in the early ’90s, we came to the realization that if we really wanted to have a charitable impact we needed to come up with a different formula,” says Clair Peterson, the tournament director.

Not every event can give such high numbers. The PGA Tour would not discuss the tournaments at the bottom of the charity rankings. But to give substantial dollar amounts to charity, these tournaments need to spend big to attract corporate sponsors and fans.

It’s hard for other tours to be at the same level. Consider an LPGA event like the Marathon Classic in Toledo, Ohio. This past year — when Sei Young Kim held off Lexi Thompson to win— it generated close to $600,000 for 23 charities. That brought its total giving since 1984 to $12 million, ranking it among the more philanthropic events on the LPGA Tour.

“It’s truly a community event,”says Judd Silverman, the executive director who helped start the tournament when he had a week off from caddying for Craig Stadler. “There are a lot of companies and a lot of people who are supporting the tournament, and the end result is a lot of different charities get contributions.” Where tournament directors grow reticent is talking about what percentage of their revenue goes to charity. Given the high expenses to run a tourney, the amount of donations relative to expenses are low by nonprofit standards. In its most recent public filing, from 2016, the Thunderbirds, which runs the Waste Management Phoenix Open, reported $48 million in revenue but only $8 million in grants.

The highest expenses for the tournament were for equipment rentals, catering and recycling. That year, the company charged with setting up the coliseum around 16 — and the other grandstands — was paid $5.5 million.

“The amount that’s going out the door for bills, law enforcement, concessions — it’s a big number,” Woods says. “As large a revenue company as we are, we run it with a fleet of volunteers and 15 full-time staff members. We’re as conservative as we can be to try to get the most dollars out the door.”

As I walked out of the coliseum that day in February, past the bleachers that led to the 17th tee, I was struck by the covering of beer cups still on the ground three days after Fowler won the tournament. But what I thought of then as litter, I know now are charitable donations.