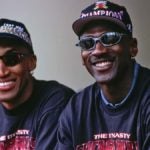 Scottie Pippen and Michael Jordan at the Chicago Bulls championship parade in 1997.

We all know Michael Jordan is a big golfer and a golf fan. Now we know he tried to get Bulls teammate Scottie Pippen hooked, too.

The long-awaited ESPN documentary on Jordan and the Bulls dubbed “The Last Dance” debuted Sunday night with the first two episodes of the 10-part series airing. In the second episode, Pippen talked about how Jordan got him into playing golf.

“Michael was such a superstar in the game of basketball and he was bigger than any superstar than any sport had ever had,” Pippen said. “It wasn’t like he was any average guy and like, ‘Let’s go have lunch.’ It’s different. My rookie year he gave me a pair of golf clubs.”

A noble gesture from Jordan, right? Pippen isn’t so sure.

“He was trying to lure me in so he could take all my money,” Pippen said, laughing.

Who knows how often the two teed it up together or whether Jordan ever took big bucks from his pal, but the golfing public is well aware of Jordan’s addiction to golf and affinity for gambling. “He’ll play you for whatever you want,” Rickie Fowler once told The Action Network. “Whatever makes you scared.”