There’s pressure, and then there’s sweating out a pro-am victory (the latter is terrifying)

PEBBLE BEACH, Calif. — Around lunchtime on Sunday, something unusual happened on the 18th green at Pebble Beach Golf Links. The leaders of the Pure Insurance Championship were just making the turn as Esteban Toledo lined up an 8-footer to save par on Pebble’s iconic finishing hole. The onetime boxer from Mexico was languishing in 20th place, so his putt had little meaning. Or did it? When Toledo’s ball disappeared into the cup, he punched the air a couple of times and let out a whoop. His playing partner Kenny Perry was about to tidy up a double bogey but you wouldn’t have known it from the huge smile on his face. What exactly was going on here? Turns out Toledo’s par save meant everything to his pro-am partners Matt Ginella and Alfonso Ribeiro, who had made a hash of the 18th while trying to get into the clubhouse with the pro-am lead. They both enveloped Toledo in bro-hugs at the edge of the green, one last bit of camaraderie in a round full of good cheer. A little while later it became official: Ginella, the Golf Channel talent, and Ribeiro, the TV personality, were the champs by two strokes, a deeply meaningful achievement for a pair of golf tragics. “I knew they were trying to win and it was a big putt for them,” Toledo said. “They had kind of screwed up that hole so I knew they were counting on me. It felt good to come through for them.”

It is the magic of this tournament, and just a few others, that everyday golfers get to play alongside decorated champions. Only 10 of the 78 amateur teams made the 36-hole cut, and Ginella and Ribeiro came into the final round in second place, just one stroke off the lead. Both are used to being in the spotlight but on Sunday they felt the enormity of the opportunity. “They were so jacked up having a chance to win, you couldn’t help but feel the energy,” says Perry. “Matt couldn’t even tee up the ball on the last few holes he was so nervous. It was hilarious. I was thinking, Matty G, you might need to take up a new hobby.”

On the 10th hole, Ginella (playing off a 9 handicap) had faced a two-footer for a par-net-birdie. When he went to replace his ball, he couldn’t set it down properly because his hands were shaking. But the ball marker resting atop that glorious green had belonged to the garrulous uncle who taught him the game, Tony Kielhofer, whose advice to young Matt was simple and profound: “Just get the ball in the f—ing hole.” Ginella shook in the putt, the exclamation point on a 10-hole stretch that his team played in 10 under to take control of the pro-am. Highlights included Toledo stuffing his approach shot on the first hole as the sun rose in the distance, Perry chipping in for eagle on the par-5 second, Ribeiro making a deuce on No. 5 and then a net-eagle on the next — the third time in three days he had gone 4-for-3 on a par-5. Ribeiro, playing off a 4, is a regular on the celebrity circuit, annually competing at the Crosby Clambake, Lake Tahoe and sundry other events, but this was the first victory of his golfing life. “It feels so good, man,” he said. “You make it to this age and it’s not easy to get your name on a trophy.”

Ginella and Ribeiro are both extroverts and they felt that played a role in their victory. “We had great chemistry, and that had a ripple effect,” says Ginella. “We had buy-in from the juniors [whose scores also count toward the pro-am competition], we even had buy-in from crusty old buggers like Steve Pate and Colin Montgomerie.” 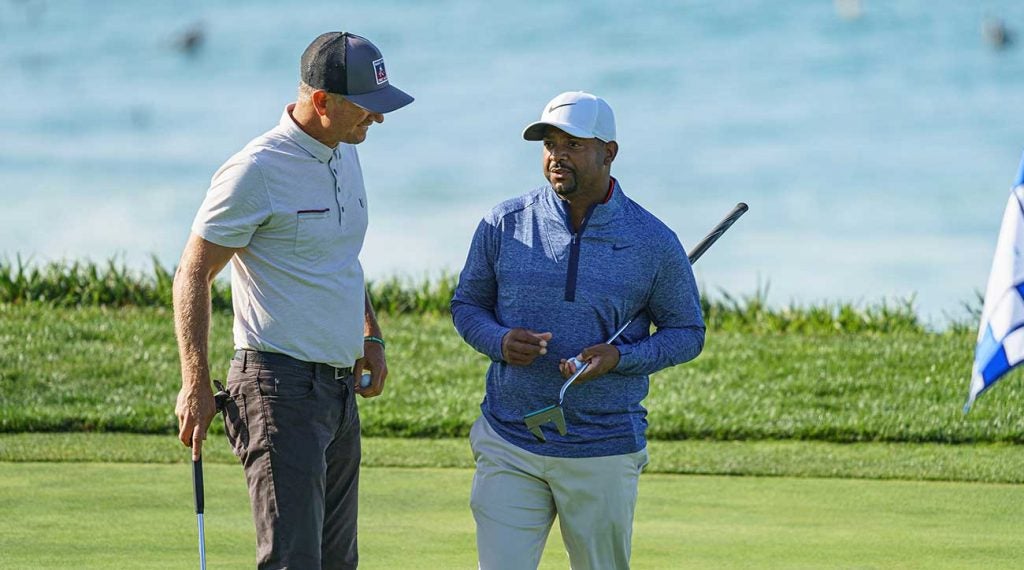 Matt Ginella and Alfonso Ribeiro won the Pure Insurance Championship, but it didn't come without plenty of nerves down the stretch.
Courtesy Michael Weinstein / @Weinsteinphotobooks

They played with Monty on Saturday at Poppy Hills. His ballstriking was immaculate but he couldn’t buy a putt, at one point leading Montgomerie to mutter, “It’s a pity to waste all this talent putting like this.” But on the 15th hole, with everyone else in the group in trouble, Montgomerie buried a 20-footer to save par and Ginella lost his mind, screaming, “Moooonnnnttttyyyyy!” A couple of holes later, he sought some advice for the crucible of the impending final round. “I’m walking shoulder-to-shoulder with a World Golf Hall of Famer and one of the greatest Ryder Cuppers ever, why would I not pick his brain?” Ginella says. “What an incredible opportunity.” Montgomerie offered counsel that borders on the metaphysical: “Light grip. That’s the only thought.”

Was he able to do that on Sunday at Pebble?

“No, not even close,” Ginella said, noting he had awakened at 3:30 that morning and couldn’t go back to sleep because of the nerves. “I was way out of my comfort zone.” And that was even with one of his closest friends on the bag, Kevin Price. A part-time caddie at Pebble, Price was feeling it, too. On the eighth hole a pal offered him a breakfast burrito and KP said, “I can’t breathe. I’m not going to eat.”

The afternoon ended with them taking photos together at the trophy ceremony, along with the winner of the main event, Kirk Triplett. “Not many people get to play inside the ropes on Sunday at Pebble Beach for something that matters,” says Ginella. “Who does that? Not me, a shaky 9 handicap. I can’t believe what just happened. This is surreal.”