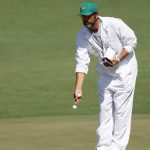 AUGUSTA, Ga. — Typically, Adam Scott says, Augusta National plays pretty easy at the beginning of Masters Week. The greens are slow. They’re soft. The friendly setup, he says, can lull you into a false sense of security before dropping the hammer come Thursday morning.

But Scott vividly remembers one year, 2007, when he was greeted by rock-hard practice greens.

“I actually remember being on the 16th green with Greg Norman and we poured some water on the slope and the water just trickled all the way across and off the green. It never got absorbed. That stood out for me,” Scott said after a practice round. Why did he bring it up? Because even though he didn’t pour any water on the greens during Monday’s round with Cameron Smith, those greens felt awfully similar.

“It looked like it was really at a tournament length, the grass around the greens and the firmness and the speed of the greens,” he said. “It had that brown tinge on it. If that’s a sign of things to come, we’ve got to buckle up for this week.”

“You can hear it,” Bubba Watson said by way of agreement. Hear it? Hear the speed? “When it hits the green, you can tell the sound of it.  You can hear the spin or — you can hear no spin. I wouldn’t say it sounds hollow, but it just sounds a little harder, a harder hit on a green.”

What changes, specifically, when you have firmer greens? Everything, explained C.T. Pan, who has hired a local caddie to help him navigate the treacherous slopes.

“I’m sure everybody is saying this,” he said.  “The greens are faster and firmer, which will make it tougher to play, and that means your landing zone is much smaller.  You don’t have much room to miss.”

Get all that? It looks different. It sounds different. It feels different. And it plays different. And while a torturous Augusta National might not sound particularly fun, the majority of competitors seemed to be rooting for things to stay firm and fast. Fred Couples, Augusta’s unofficial mayor, said that if the rain holds off, “it’ll be as difficult as the course has played in a long, long time — and that’s what I think we need to have.”

Jason Day is among those begging for the rain to stay away and pleading for speedy greens.

“I feel like harder conditions will — I guess the good players that are playing really solid golf right now will somehow make their way to the top, and I like it that way.”

It’s rare to find unanimity among Tour pros. But on Monday, nearly every pro who spoke to the media agreed: These conditions are the best. “That’s when this golf course shines,” said Patrick Cantlay. First-timer Will Zalatoris gleefully described the greens as having “that purplish baked outlook to them.” Jordan Spieth was all in, too. “I think the firmer the better, the way this golf course plays.”

Of course, we’ve been fooled before at Augusta National. Some years, soft early-week conditions have turned overnight. Other years, storms have turned a firm course soft. There’s a chance of rain in the forecast for each of the tournament days. Things could still change. But it seems more likely that they won’t. We’ll see balls bouncing. Rolling. Trickling. We’ll see players playing offense and defense. We probably won’t see 20 under at the end of the week.

“It’s going to be pretty spicy,” he said. “If they keep progressing the conditions, I think we’re in for a big weekend.”