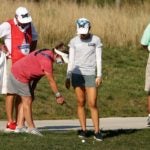 Lydia Ko speaks to a rules official about her drop from the cart path on the 18th hole at the Marathon Classic.

It looked like the result of the LPGA Tour’s Marathon Classic was just about sewn up. Tournament leader Lydia Ko held a one-shot advantage over playing partner Danielle Kang on the final hole, a par-5, and found the fairway with her drive. Ko was within range to go for the green with her second shot, but ended up wide of the green on a cart path. With Kang in the greenside bunker after her second shot, an up-and-down from Ko would seal her victory, and a par would likely get the job done as well.

But golf is anything but predictable, and what happened next to Ko was about as shocking as it gets.

Kang managed an up-and-down from just off the green to save par, so after leading by one shot heading into 18, Ko needed to make her bogey putt not to win, but just to get into a playoff. Ko gave the putt a run, but it missed with speed on the low side, stopping about three feet past the hole. Ko then made the ensuing comebacker for a double-bogey 7 to lose the tournament title by one shot to Kang, whose victory marks her second in as many weeks.

The collapse was shocking for many reasons, but mostly because Ko, a former longtime World No. 1 and teenage prodigy, held a five-shot lead with only six holes to play. Ko, 23, has 15 LPGA victories and two majors on her resume, but was seeking her first victory in over two years. Kang now has four career wins, including a major championship, and has risen to No. 2 in the Rolex world rankings.