European Tour player Lucas Herbert is facing criticism after committing a rules infraction at last week’s Dubai Desert Classic. Herbert shared the 36-hole lead with Bryson DeChambeau, who would go on to win, and the two played together in the third round when the penalty occurred.

Late on the front nine, rules official Andy McFee informed Herbert that he was being handed a penalty from his play in a waste area at the par-5 third. Herbert had used his wedge to move loose impediments as well as some sand from behind the ball.

Rules 12.2a and 12.2b allow players to touch or move loose impediments and will be generally allowed to touch ground or sand with a hand or club. Still, it is forbidden to improve your lie or test the surface of the sand. Herbert was deemed in violation and accepted his two-shot penalty, which led to a third-round 72. He finished T7 after a final-round 69. 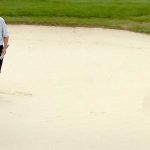 You may also like 2019 rules changes to know: What you can (and can’t) do in a bunker

Former European Tour pro Gary Evans captured the moment the penalty was awarded on camera and criticized the move. “If I ever witnessed a playing partner do this, a 2 shot penalty would be the least of his worries!” he tweeted.

If I ever witnessed a playing partner do this, a 2 shot penalty would be the least of his worries! 😡😡😡 pic.twitter.com/Ltv7HP9jjc

Herbert joined the Inside the Ropes podcast to defend the move. “A bad brain fade, I guess,” he said. “In my heart of hearts, it didn’t affect the actual golf shot. I went back and looked at the lie, even recreated a similar lie later on. It was still a horrible lie. I would have loved to have hit a different shot if the lie was a lot better. At the end of the day, it was still a horrible lie and it was still a long way away from the ball.”

.@lhgolf5 has waited until today to explain what happened in Dubai with THAT two-shot penalty.

Herbert, No. 73 in the world, said he hoped the moment wouldn’t stick with him. “We needed to take the penalty because it was sort of the right thing to do in the end. I didn’t want to be labeled as someone who doesn’t play the game fairly.”