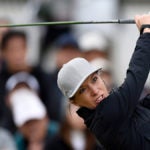 Mel Reid said she did not want her tweet to take away from the charitable cause of the TaylorMade Driving Relief event.

A golfer who criticized the lack of female participation during Sunday’s TaylorMade Driving Relief event says the comment has been taken out of context.

Mel Reid, a golfer on the LPGA and Ladies European Tours, said she did not want the tweet to take away from the charitable cause of the skins game, which featured the team of Rory McIlroy and Dustin Johnson taking on the team of Rickie Fowler and Matthew Wolff and helped raised over $5 million for coronavirus relief.

“I feel my tweet has been taken completely out of context and quite honestly the nasty comments I’m receiving it’s kind of sickening,” Reid wrote on Twitter. “I think the charity match was of course a fantastic cause and yes, I think those four males golfers who participated were perfect for such an occasion. My point was never to take away from the Charitable cause. I just felt it was a cool opportunity missed to involve a couple female golfers/broadcasters and really bring GOLF back.”

On Sunday, Reid tweeted that the event, one of the first live professional golf events since the coronavirus shut down play in mid-March, missed an opportunity to showcase both men’s and women’s golfers.

“I know right now is a tough time for most so I can only speak for the world I’m involved in,” tweeted Reid, who has won six times on the Ladies European Tour and been part of three Solheim Cup teams. “Yet again, today we show the disparity between men’s and women’s golf. Today’s charity event should showcase ‘golf’ not just men’s golf. What an opportunity golf has let slip, once again, to represent equality. I would love to have witnessed women athletes/golfers be invited to showcase the wonderful game as well as these incredible male golfers.”

Reid then responded on Twitter to both criticism and support.

In her most recent tweet, Reid said she “will always fight for change in the world.”

“I will always speak up for the respect of women athletes,” she wrote. “For those who reached out and supported me the last couple of days….I thank you.”