‘It’s such a weird rule’: Korda sisters question LPGA award neither of them is eligible to win 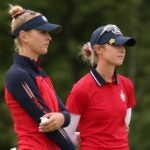 Jessica, left, and Nelly Korda at the Solheim Cup earlier this year.

By nearly every measurement, Nelly Korda has had a banner 2021. Three LPGA titles, including a major. Gold medal at the Tokyo Games. World No. 1.

But there’s one accolade she’s guaranteed not to collect this year: the LPGA’s Vare Trophy for lowest scoring average — even though with just two events remaining in the season, Korda’s 69.074 average is tops on tour.

Also assured not to win the award is Jin Young Ko, who is currently second in the LPGA scoring average standings, at 69.186.

All three players are ineligible for the award because they will not have played enough rounds in 2021 to qualify. To be Vare eligible, players must notch either 70 rounds or 70 percent of official tournament rounds, whichever number is smaller. That disqualifies Korda (58 rounds to date), Ko (59) and Park (62), meaning the frontrunner to win the Vare is now Lydia Ko, who sits fourth in the standings with a 69.615 average over 69 rounds.

Ko, too, was in danger of coming up short on the minimum-rounds requirement. According to Golfweek, she was planning to sit out this week’s Pelican Women’s Championship, in Belleair, Fla., until she learned that she needed the start to qualify for the Vare.

Among the other players who were unaware of the Vare parameters: the Korda sisters, Nelly and Jessica.

Nelly said she learned about the rule recently in a group chat.

“I was like, ‘Oh, okay. Cool. That sucks,’” she said Tuesday in a joint press conference with her sister at the Pelican.

“Yeah,” added Jessica, who is sixth in the Vare standings with a 69.927 average but also ineligible with only 59 rounds played. “I was like, Great rule.”

Here’s how the rest of that press-conference exchange went:

Nelly: “I mean, I would say Jin Young has had an amazing past couple events. If she was to win it, she deserves to win it. I would say the same for me. It kind of sucks that that’s just how it is. Yeah, that’s all I have to say.”

Jessica: “It’s just that the person who’s now in the running, is it considered an asterisk or — I don’t know. It’s just such a weird rule when you’re No. 1 and 2 player in the world.”

Earlier in the press conference, Nelly was asked if she had considered playing more events in 2021.

“No,” she said. “My schedule was crazy enough. I had to pull out last minute from Portland because I just wasn’t feeling well, and same with Walmart. So, no, I don’t think I could have played more events because my body was just so tired. I typically play all the events at the start of the year, and if I play well then I’ll take some time off, because the traveling in the summer was just so crazy.”

A reporter asked the Kordas if the rule should be changed or reconsidered.

“One-hundred percent,” Jessica said. “Especially with the way the schedule is. That’s for other people to decide. We’re just here to play.”

To which Nelly said, “Yep.”

As a point of comparison, there are two season-long scoring-average awards available to PGA Tour players: the Vardon Trophy, which is awarded by the PGA of America, and the Byron Nelson Award, which the Tour hands out. To be eligible for the Vardon, players must complete a minimum of 60 rounds, while Nelson eligibility requires a minimum of only 50 rounds, or 20 fewer than the Vare.

This isn’t the first time an LPGA player who finished atop the scoring-average rankings didn’t win the Vare. At the end of last year’s Covid-shortened season, Danielle Kang claimed the award even though three players had lower scoring averages. In 2004, Annika Sorenstam, who that year tied her own record for all-time low LPGA scoring average (68.697), also fell prey to the minimum-rounds rule, though just barely, with 66 rounds played.

Vare winners don’t just get bragging rights. They also earn one point toward the required 27 points for LPGA Hall of Fame qualification.