Jordan Spieth’s marriage to high school sweetheart Annie Verret is imminent. But Spieth chose a unique activity for his last hurrah with his friends. Instead of doing the classic bachelor party revelries, Spieth and his entourage spent the day learning everyone’s favorite Winter Olympics event: curling.

On Friday, a manager of the DFW Curling Club posted a photo to Facebook of Spieth and his wedding crew on the curling rink. The caption reads, “Had a great pre-wedding learn to curl event today at DFWCC. Congratulations to Jordan Spieth, Ricky [sic] Fowler, Justin Thomas and crew. We had a blast!”

Had a great pre- wedding learn to curl event today at DFWCC. Congratulations to Jordan Spieth, Rickie Fowler, Justin Thomas and crew. We had a blast!

Whether or not this was an official bachelor party or just a “pre-wedding” event as the post suggests, Spieth could hardly pick a better crew to roll the rock with.

Among those in the photo are friends and fellow PGA Tour stars Justin Thomas and Rickie Fowler. Even Spieth’s loyal caddie Michael Greller can be seen mugging for the camera, dressed in a Seattle Seahawks hoodie. 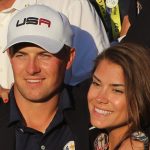 You may also like Jordan Spieth evicts roommates, plans honeymoon in preparation for wedding

The jury is still out as to how well Tour pros’ links skills translate to the ice. But from the photo it certainly seems like these professional hackers need some more time to get used to the cold climate in the rink.

As for Justin Thomas, it seems he was multi-tasking the Friday after Thanksgiving. While he obviously spent some time with Jordan and crew, he also watched The Match between Tiger vs. Phil, which he tweeted about vigorously.

93 yards for 9 mill…. that’ll work! @PhilMickelson might just hoop it and do the worm all the way home