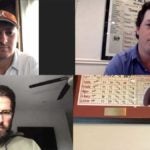 Jordan Spieth and his former teammates made a surprise Zoom appearance at their alma mater.

But there they were together again; the 2012 national champions — Jordan Spieth, Dylan Frittelli, Cody Gribble, Toni Hakula and Julio Vegas, along with coaches John Fields, John-Paul Hebert and Ryan Murphy (plus this UT alum, now a GOLF.com writer) — swapping stories and reminiscing on the year that they cemented their legend in the annals of Texas sports.

This “together” was a little different, though.

Instead of being in each other’s physical presence, seemingly the only accepted definition of “together” before a virus flipped the world upside down, the team sat together in a virtual room on Zoom. They surprised a room full of aspiring sports journalists from their alma mater, a small act of giving back to the community where they experienced a collective coming of age.

As the surprise was revealed, the faces of the students on the call lit up. When Spieth joined the room, eyes got even wider — even those who aren’t golf fans are at least familiar with one of the university’s dearest sons. Plus, it’s not every day a major champion visits your class. (Not in my UT experience, at least.)

“For us just to come in and tell stories, hopefully it brought any bit of positivity or joy,” Spieth said afterwards. “If they garnered any kind of positivity out of it, that’s awesome. And if we can impact them in any way to understand the significance of doing what’s being asked, then that obviously helps overall.”

In-person classes on the Austin campus have been canceled — like so many other universities around the country — since March 13. This cancelation put an abrupt end to many of these student’s college experiences. To lift their spirits, a cast of Texas sports legends have been joining this class over the last couple weeks. First, it was Colt McCoy. This week it was the golfers’ turn to boost morale.

“I have to think that this is a terrible situation for the students and what they’re going through with not be able to get back down to Austin,” Gribble said. “But I like to think that this was a little bit of a joy for them to hear something exciting about the history of the school they go to.”

Over the course of the hour-long class, the team remembered that fateful year nearly a decade ago — from the beginnings of their special run, to Frittelli sinking the clinching putt on the 18th green of Riviera Country Club. The video of that putt was played early on and the five teammates wore matching grins beaming with pride. It’s hard to tell who enjoyed the hour more, the golfers or the students. But the entire experience provided a brief reprieve.

“This was absolutely a gift for all of us today,” said Fields, who’s been the head coach at Texas since 1997.

The team parted with words of advice for the students as they headed back to reality. Then the call ended much the way their last time together concluded — horns in the air, singing the “Eyes of Texas.”