Jon Rahm, mature as ever, is on the verge of his most important victory 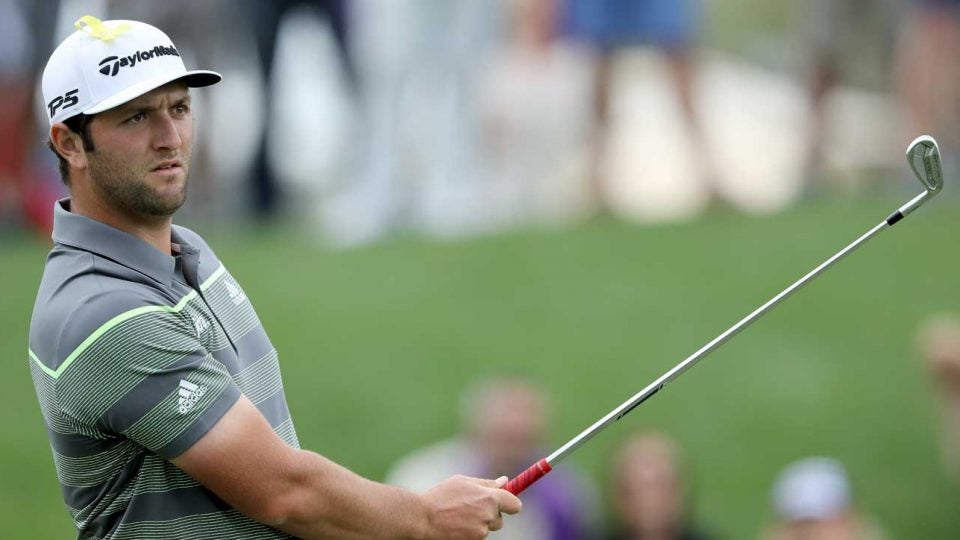 PONTE VEDRA BEACH, Fla. — Given his girth, it’s hard to believe that Jon Rahm is enjoying a growth spurt, but it’s happening right before our eyes.

In his brief, successful career, Rahm had shown himself to be two things: a supreme talent and a glowering hothead. Birdies and fits of pique seemed to arrive in equal measure. Now 24, and engaged to be married, Rahm is suddenly acting and sounding like a wily vet. The third round of the Players was case in point. Over the first 11 holes Rahm was in full flight: awesomely long and straight driving, pinpoint iron play and a feathery touch on and around the greens. After a birdie-birdie-eagle binge around the turn he was five under on the day and racing up the leaderboard. Rahm’s kick-in eagle had come by way of a 4-iron that he recalled in the dreamiest of tones. “It was one of those shots that you visualize in your mind and one of the few times in your life that it’s going to come out exactly how you see it. It happens so rarely that…gawd.”

But then things got a little squirrely. On the 14th hole Rahm hit what he thought was a perfect approach only to see it rip through the wind into an awkward spot over the green. Rather than pouting, as in the past, Rahm resolutely pitched to three feet to save his par. On the next hole, a pounded drive ran through the dogleg, into a funky lie on pine needles. Again Rahm refused to give in, following with clever shot he was surprised to see expire short of the green. He rallied to saving a crucial par and keep the momentum going.

“About eight months ago, maybe not that long, I wouldn’t have finished at eight under [for the round],” he said. “I think I would have lost my patience on 14 because I actually hit a good shot and ended up way long with that really difficult up-and-down. And then a good tee shot on 15 and a good second shot and I got the worst out of both things — ended up in the pine straw and then ended up short. I think I would have been a little more frustrated [in the past]. I might have made both pars, but I don’t think I would have been as relaxed as I was today, and I think that’s what enabled the whole day, right. I definitely feel a difference in myself, and it’s been great to feel that pride of all the work that I’ve done to
get to this point…It’s been a work in progress of many years to get to this point, and it’s hard to do when you’re playing highly competitive golf.”

Rahm’s equanimity was rewarded with two more birdies coming in, including another tap-in, on 17. His scorching 64 gives him a one-shot lead over the powerhouse duo of Rory McIlory and Tommy Fleetwood. Rahm is clearly spoiling for a fight with these more celebrated peers. With so many talented twentysomethings roaming the landscape, Rahm has somehow become overlooked, even though in 2018 he won in Palm Springs and Dubai, finished fourth at the Masters and PGA and then punctuated his year by double-dipping on Tiger, beating him in Ryder Cup singles and then blowing away the field at Woods’s tournament in the Bahamas. For such a young man, Rahm is already thinking in historical terms. He seems himself as part of the proud Spanish lineage that flows from Seve to Olley to Sergio. Now Rahm is on the precipice of what would be by far his most important victory, and he recognizes the magnitude of the opportunity. “It would be absolutely amazing to name yourself a Players champion,” he says. “It’s definitely one of those events that they consider to get you in the Hall of Fame. It’s career-defining.”

No one doubts he’s a Hall of Fame talent. Now it’s time for the new and improved Rahm to show it.

What else to watch out for in the final round of what has been a compelling Players:

— The tournament will be lost on the front nine and won and the back. The Stadium is one of the most lopsided courses in championship golf, non-linksland category, with the nines playing drastically different. Ask Kevin Na, who went 43-35, or Adam Long (42-35), or Tiger Woods (39-33). Many of of the contenders had similar struggles, writ small: Tommy Fleetwood (38-32), Abraham Ancer (37-33) and Jim Furyk (37-34). Late Saturday afternoon it got downright cold at TPC Sawgrass — Bryson DeChambeau was blowing on his hands walking to the scoring area so he could autograph his scorecard properly — and it’s going to be nastier on Sunday, with rain and cooler temperatures expected. Expect plenty of attrition on the front nine and, among those left standing, the usual fireworks on the back, with its two reachable par-5s and redesigned 12th hole, a drivable par-4 that is playing more like a long par-3.

— Jason Day, in fourth place three shots back, is looking dangerous. His long-game has been superb, and if one of the best putters in golf can convert more chances than he has over the first three rounds, look out. “It was nice to be able to hole that 12-footer on the last,” Day said of a par-save that finished off a 68. “So hopefully it’s good momentum going to tomorrow’s round.”

As a pursuer, Day is particularly happy about the heavy weather that is coming. He says,”Every time there’s tough conditions or a tough golf course, my agent Bud Martin goes,’This is really good for you.’ And then I laugh and I say,’It’s easy sitting in the bloody player dining!’ You know what I mean? It’s stressful. I’m out here losing my hair. It’s tough. I mean, the harder the better? Yeah, I would like to think so, but just because it’s kind of harder for the leaders to get away. It’s a lot easier to come back when it’s obviously tough conditions. So there has to be a lot of patience tomorrow, and that’s not only for myself but for everyone because it’s going to be frustrating out there.”