PALM BEACH GARDENS, Fla. —Wednesday was the pro-am for the Honda Classic, where soft fairways and rock-hard greens wrought havoc on most of the amateurs taking on PGA National. Justin Thomas, who was drafted first of all players, teed off at 7:05 a.m. alongside several Honda executives. What does someone like Thomas tell his pro-am partners? When asked afterwards about his advice for amateurs, he grinned and cited a story from his recent Ryder Cup captain, Jim Furyk.

“They always ask for advice in these pro-ams, and although it’s very blunt and very aggressive, I remember Jim Furyk’s talking at the Travelers, talking to the group,” Thomas said, explaining that Furyk had an extremely clear message for his advice-seeking pro-am teammates. “He was like, ‘Don’t take this the wrong way, but you guys suck. We don’t think you’re good, so don’t think that you’re good because we’re expecting you to shoot 90.'”

Thomas continued with his own thoughts on the matter. “Like, you’re an 18 handicap for a reason, know what what I’m saying? So it’s like, don’t go out there thinking you’re going to hit the same shots we are because you’re not. We’re better than you, we practice a lot more. You have jobs. Our job is this. We have to be good or we don’t have a job. So it’s like, don’t expect so highly of yourself because it’s just not realistic.”

There’s a positive message in there somewhere. Thomas explored the idea further when he explained how he plays his best; when he tees it up in Pro-Ams, he can play more aggressively and sometimes ends up playing better. He drew on that freedom last Sunday, when he brought Golf Club de Chapultepec to its knees en route to a Sunday nine-under 62.

“I’ve driven it well and putted well in pro-ams before, and why is that I do it better then? It’s because I just don’t care,” Thomas said. “You don’t care about the result. Okay, if I hit it in the whatever, par is your partner, you pick it up and you go to the next one. 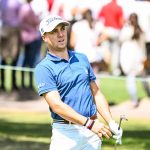 You may also like Justin Thomas sounds off on new rules: ‘I think they’re terrible’

“I think I’m trying to get better at kind of getting in that mind frame of just not worrying about the result, don’t result-oriented, just be more about the process and just go out there and try to have some fun and hopefully good golf comes from it.”

Thomas tees off Thursday at 12:35 p.m. alongside Rickie Fowler and Billy Horschel. Furyk is off at 7:35 a.m., playing alongside Mackenzie Hughes and Cody Gribble. You can see complete Honda Classic tee times here.