Jessica Korda is running away with the LA Open — can she close? 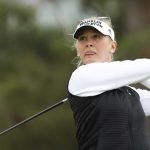 Jessica Korda is looking for her second win this season.

If some is good, more is even better for Jessica Korda at Wilshire Country Club. After tying the course record with a 64 on Wednesday, she nearly did it again with a second-round 65 on Thursday to take a three-shot lead at the HUGEL Air Premia LA Open.

Korda opening with a victory back in January, but her previous two events in April both ended with finishes outside the top 35. Beyond that, she took a redeye flight from Hawaii and played just nine holes at Wilshire during a practice round. But here she is now, halfway to her second victory in four months.

“Being able to make a lot of birdies helps,” Korda said Thursday. “I know the last couple events I’ve made a lot of bogeys, as well, which has kind of killed my momentum a little bit, and that’s the only thing we’re trying to change a little bit is maybe play a little bit smarter and starting to get a little bit more consistent with my swing which is really nice.”

She tied the 18-hole scoring record and set a 36-hole record at the event, largely behind incredible ball-striking. Korda has hit 33 of 36 greens in regulation, and as she said, “When I did miss, it wasn’t by much.”

Ask her plainly and — despite holding a commanding lead — it sounds like she could have finished even better: “It’s going to sound crazy but I actually lipped out a good amount out there today, so it actually could have been lower.”

She has a handful of the best women in the world chasing after her, beginning Friday afternoon. Jin Young Ko will play in the final pairing with Korda — she’s the No. 1 player in the world — at 10 under, while Sei Young Kim and Brooke Henderson — Nos. 3 and 6 in the world — are at nine and eight under, respectively.

You can watch the LPGA on Golf Channel each of the next two nights, beginning at 6:30 p.m. ET Friday.