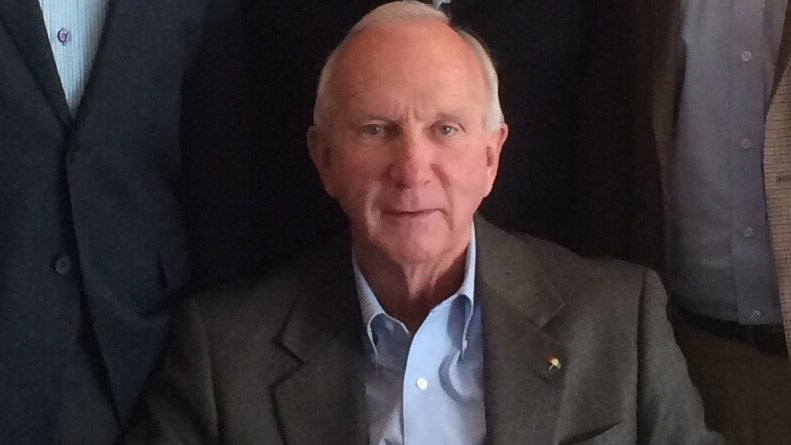 Jerry Palmer, kid brother of the golf legend known as The King, died on Saturday, November 19, at the same hospital in Pittsburgh where Arnold Palmer died less than two months ago. Jerry Palmer, 15 years younger than Arnold, was 72.

Jerry Palmer was a lifelong resident of Latrobe, Pa., and the longtime general manager of the Latrobe Country Club, a course owned by Arnold where their father, Deacon, had been the longtime head professional and superintendent.

“Jerry was very witty and very dedicated to my dad,” Peg Palmer, one of Arnold’s two daughters, said. “He liked serving my dad, in business and at the club. He always tried to be true to my dad’s personality and think about what my dad would want.”

Jerry, soft-spoken and deeply loyal to Arnold, was part of a small group of men and women that helped Arnold Palmer’s various enterprises run smoothly but also, and significantly, retain a small-town, family-run touch. In recent years, with Arnold far less ambulatory than he had been in his prime, it often fell to Jerry to give visitors to Latrobe the grand tour of the club and the warehouse where Arnold stored thousands of clubs, along with hundreds of golf bags, golf shoes, various portraits of Arnold sent in by fans, along with various other items. If you think of this warehouse as a Palmer museum, Jerry was its chief curator and docent.

Not that Jerry would have ever thought of himself that way. Jerry graduated from Latrobe High in 1962, when Arnold had already won three of his four Masters titles, plus two British Opens and a U.S. Open. His brother was an international sporting icon, comfortable in the presence of corporate chiefs and a former U.S. president. Jerry, following the path of a lot of kids from Latrobe, enlisted in the Air Force—Arnold was already an accomplished pilot—and later went to Penn State, at the height of the Joe Paterno era, where he studied agronomy. Jerry was Latrobe Country Club’s superintendent, like his father before him, before becoming its general manager. Jerry was an everyday workingman Pennsylvanian, except that his brother was one of the most famous people in the world, and that he wore a shirt with an umbrella on it, or some nod to Arnold, every single day.

Jerry and Arnold—along with Arnold’s pilot, Pete Luster, and his longtime assistant, Doc Giffin, and various others—had lunch together regularly when Arnold was in Latrobe, which was often. The brothers had the same blue eyes and they were both good listeners. Arnold’s golf was better.

Arnold’s influence is evident in Jerry Palmer’s children as well. Jerry’s son, a financial planner who goes by Deke, went to Wake Forest, as did his uncle. Some years ago, Jerry’s daughter, Amanda Palmer Hinrichs, was seeking to launch a line of women’s golf clothes, according to a story about Jerry published nine years ago in The Kingdom, a magazine devoted to Arnold Palmer’s various enterprises.

Peg Palmer said that her uncle had suffered a stroke in recent years and had showed some signs of dementia, though they were sporadic in nature. As her father’s health declined, Peg said, “Jerry really wanted to be there for him.” The quick decline in his health after Arnold’s death was unexpected, Peg Palmer said.

After Arnold Palmer’s death on Sept. 25, the Latrobe Bulletin had a front-page news story with the headline `The King’ Is Dead. A subhead read, Golf Icon Put Latrobe on the Map. Jerry Palmer—Milfred Jerome Palmer, like his father before him—played a quiet an important role in keeping Latrobe, and its country club, on the map, and consistent with the values his brother and father held dear.

Giffin, who logged hundreds of rounds and probably thousands of lunches with Jerry, said that “as a golfer, he was not in Arnold’s caliber.” In truth, any day he broke 100 was a good one, despite his brother’s efforts. If it was their shared blood line that brought them together, it was their shared love of golf that kept them together. “Arnold liked to hire people he knew,” said Giffin, who was a PGA Tour press official when Palmer hired him. Arnold knew Jerry’s values. Giffin noted that they had different personalities. “Arnold was quite forceful, and Jerry was more easy-going,” Giffin said. “But they both loved the outdoors and being on the course.”