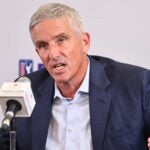 Jay Monahan speaks to the media at the Travelers Championship on Wednesday.

Jay Monahan didn’t mince words. The PGA Tour commissioner on Wednesday called the Greg Norman-led LIV Golf Invitational Series an “irrational threat,” said it is not concerned with a true growth of the game and that it’s attempting to buy the sport and dismantle the institutions intrinsically invested in its growth.

Monahan spoke to the media at this week’s Travelers Championship in Cromwell, Conn., and opened his lengthy press conference with prepared, pointed remarks about the Saudi-backed rival golf league that continues to lure players away from the PGA Tour.

In the last couple of weeks the league, which kicks off its second event next week, has landed Patrick Reed, Bryson DeChambeau, Abraham Ancer and, most recently, Brooks Koepka.

Monahan also met with about 100 players in the Travelers field on Tuesday.

“And as I also said to the players yesterday, let me be clear, I am not naive. If this is an arms race and if the only weapons here are dollar bills, the PGA Tour can’t compete,” Monahan said. “The PGA Tour, an American institution, can’t compete with a foreign monarchy that is spending billions of dollars in attempt to buy the game of golf. We welcome good, healthy competition. The LIV Saudi golf league is not that. It’s an irrational threat; one not concerned with the return on investment or true growth of the game.

“Currently no one organization owns or dominates the game of golf. Instead, the various entities, be it Augusta National or the USGA or the LPGA or the PGA Tour or the PGA of America work together to meet our own respective priorities, but with the best interests of the game overall at heart,” he continued. “But when someone attempts to buy the sport, dismantle the institutions that are intrinsically invested in its growth, and focus only on a personal priority, that partnership evaporates, and instead we end up with one person, one entity, using endless amounts of money to direct employees, not members or partners, toward their personal goal, which may or may not change tomorrow or the next day. I doubt that’s the vision any of us have for the game. Now, I know legacy and purpose sound like talking points that don’t mean much, but when I talk of those concepts, it isn’t about some sort of intangible moral high ground. It is our track record as an organization and as a sport.”

His opening remarks led to a path forward for the Tour, as Monahan broke down a future product model beginning the 2022-23 season that included revised exempt status qualifications, a new mini-series for the top 50 players in the fall and an increase of purse sizes (up to a $20 million average) for eight events.

Monahan said he talked to Koepka, who withdrew from this week’s Travelers, on Monday. LIV Golf released its press release announcing Koepka as its newest member during Monahan’s Wednesday press conference.

“Listen, every player that’s left, I’m going to say I have great admiration and respect for the contributions that they have made to the PGA Tour,” Monahan said. “And I’m disappointed that Brooks Koepka has left and has joined the LIV Golf series.”

Earlier this year, Rory McIlroy said the new league was “dead in the water.” On Wednesday, Monahan was asked if he underestimated the impact it would have.

“I wouldn’t suggest that I’ve underestimated it at all,” he said.