From format to prop bets, here’s your official guide to The Challenge: Japan Skins 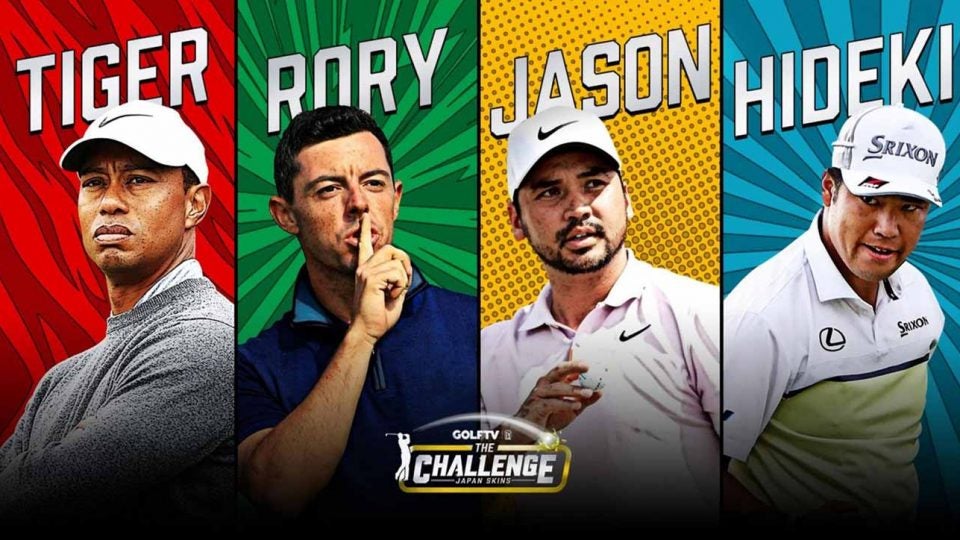 Coverage of The Challenge: Japan Skins begins at 11 ET on Sunday night.
GolfTV

You’ve heard Tiger Woods, Rory McIlroy, Jason Day and Hideki Matsuyama are up to something in Japan. But what is this skins game, when and where are they playing it and how can you get in on the action? We’ve got everything you need to know right here.

Because Tiger Woods is Tiger Woods, he’s headlining The Challenge: Japan Skins. But he’s accompanied by some big-time fan favorites: Rory McIlroy, Jason Day and Hideki Matsuyama. The four have been engaging in a variety of lead-up promotions — more than enough, we’d say. Time for the action to begin!

When and where is this going down?

These stars will take over Accordia Golf Narashino Country Club on Monday, Oct. 21 — but keep in mind the time change. Because play will begin at 1 p.m. local time, it will actually begin at midnight for East Coasters. Put another way, this is a perfect nightcap for a post-Sunday Night Football couch session.

Accordia is the same course that will host the Zozo Championship later in the week.

In a skins game, a player who wins a hole outright (not tied by any other player) takes home the value of that hole. Skins carry over from hole to hole, which means the excitement can build with several ties in a row. In a traditional skins game, every hole is worth the same amount. In this skins game, the stakes rise you you go. Here’s the breakdown for this game:

How can you watch?

In the U.S., the skins game will be televised live on Golf Channel with coverage beginning at 11 p.m. Sunday night (an hour before the players tee off). Those looking to watch from outside the U.S. can watch via GolfTV.

Ah, I was afraid you’d ask that. According to Vegas, McIlroy is the favorite. The odds per player are below, via golfodds.com.

As for which player will actually win? Well, that’s a tougher one to answer. McIlroy and Woods are returning to competition after some time away from the course, while Matsuyama and Day played at this week’s CJ Cup. There’s no question McIlroy showed the best form through the balance of 2019. Woods may have the advantage of experience; he’s the only one of the four who has played a televised skins game before (though it’s worth pointing out that hardly helped him during last year’s Match against Phil Mickelson).

The format is just as important as any of the players, because these guys are all world-class — and there’s a massive element of randomness to who actually wins an 18-hole skins game. Woods played seven in his prime (the Skins Game series ran from 1983 to 2008) but never actually won. If there’s any “smart money,” it would likely point towards Day, just because he has the longest odds and should have roughly the same chance as anyone else.

Prop bets! Granted, skins games are tough to do much prop betting with, but we dug up a couple. If you’re looking to short one of the competitors, PointsBet is listing a prop for who might go skin-free: +325 for Day +350 for Woods, +400 for Matsuyama and +450 for McIlroy. DraftKings is offering a closest-to-the-pin competition for each par-5, with McIlroy listed as the slight favorite at +225. You can also bet hole-by-hole (Jason Day +700 to win No. 1?) or take 50-1 odds that there will be a hole-in-one, though you’d do just as well to set that money on fire with those odds.

Sportsbetting.ag offers up another angle: Over/under $300,000 for the highest value for any “Challenge Hole.” I’d lean under; there’s a risk here of upstaging the rest of the competition if the side bets get too aggressive.

Feel free to make up your own, especially if you’re planning to take in the action live in the wee hours of Monday morning. Most of all, enjoy! It’s fun to get the best players in the world doing something a little different. We’ll be here to tell you how it all goes down.