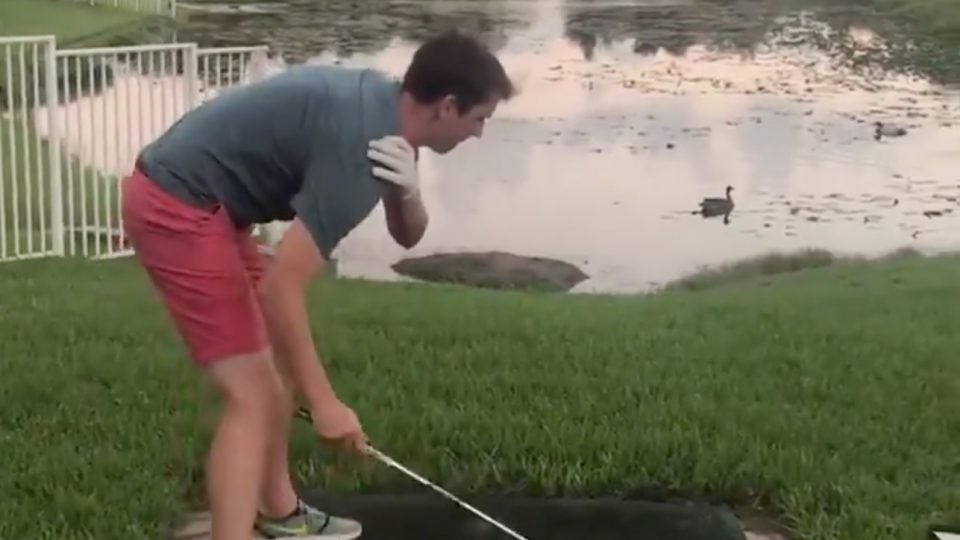 It started with a vacation. Jack Bartlett and his wife spent two weeks in Florida visiting college friends, and Jack’s buddies encouraged him to do impersonations of both Dustin Johnson and Keegan Bradley. Then about a week ago they pushed him to share the spoofs with the world.

The rest, as they say, is history.

A week has gone by since Bartlett, 29, published two videos on Twitter and became an internet sensation. In many ways, he was ready for his close-up — he’s been doing impersonations for more than a decade.

Bartlett started mimicking folks at age 17 at his local golf club in England. “I only did it for fun,” Bartlett says. “I used to impersonate other members.”

When Bartlett left the U.K. for college in the U.S. to play golf, he carried his quick wit with him. Bartlett would do impersonations of his coaches and teammates at Nova Southeastern, a Division II school in Fort Lauderdale.

After college, Bartlett took a shot at European Tour Q School, but never earned a card. When his pro aspirations ended, his impersonations continued.

Bartlett says the first pro golfer he impersonated was Colin Montgomerie, and he added to his repertoire from there.

Flash forward to a couple of weeks ago in Florida. One of Bartlett’s friends had a garden mat in his backyard, and Jack asked the guys to record his impressions of a low-key DJ and a fidgety, twitchy Keegan. Bartlett rifles golf balls into a pond to complete the act.

He thought he’d get a few laughs, and even tagged DJ in the initial tweet.”We just wanted to get as many followers as possible,” Bartlett says. “Maybe we’ll get 100 views or 100 retweets. But I didn’t expect it to be like this.”

Bartlett couldn’t believe the response. “I went on Twitter and saw so many notifications,” he says. “It just really blew up.”

Bartlett posted his Keegan impersonation the next day. So far, it has racked up nearly 1,000 retweets and almost 6,000 followers. Bartlett didn’t reveal that Bradley was his foil, and asked viewers to guess. For those of us who follow the game closely, it was obvious.

Following my first impression yesterday of DJ I thought I’d share another with you all. Can you guess who!? Side note, I’m not a voice impersonator like the talented @ConorSketches I’m all about the mannerisms and swing #JBimpersonates pic.twitter.com/XbDaKZngB3

Bartlett resides just outside of London and plays golf once a week. He plans to continue building on his newfound fame — he’ll be tweeting a new impersonation every a week, and the European Tour has already reached out to see if he’d do some imitations of their players.

So, maybe Bartlett will find himself on the European Tour after all. Get ready to see more of him.