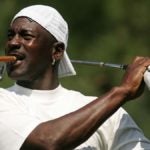 Michael Jordan channeled a bad golf round into one of the best performances of his basketball career.

In last night’s debut episodes of “The Last Dance,” ESPN’s Michael Jordan documentary, golf fans everywhere witnessed the difference between a bad round of golf for a high-handicap hacker and a bad round of golf for the greatest basketball player in a generation. Jordan’s bad day on the links came in the spring of 1986 against then-Celtics guard Danny Ainge.

“I took a few bucks off of Michael that day, and we’re talking trash to each other,” Ainge said. “That might have been a mistake.”

A mistake why? Because Ainge’s Celtics were playing Jordan’s Bulls in Game 2 of the first round of the NBA Playoffs that night. And because Jordan had already put up 49 points in a losing effort in Game 1, and probably didn’t need further motivation to produce an all-time performance in Game 2 of the best-of-5 series. And also because Michael Jordan enjoys losing — even if it’s in a relatively meaningless round of golf — the same way most people enjoy a root canal.

That night, with a bad outing against Ainge fresh on his mind, Jordan had the playoff performance of a lifetime. MJ set the NBA’s single-game playoff scoring record with 63 points on 22-of-41 shooting, passing Elgin Baylor’s 61-point performance from the 1962 NBA Finals. He added 5 rebounds, 6 assists, 3 steals and 2 blocks to that monster tally.

“It was an incredible playoff performance,” Celtics forward and NBA Hall-of-Famer Larry Bird said. “I’ve never seen it before. I haven’t seen it since. It was God disguised as Michael Jordan.”

Despite Jordan’s performance, the underdog Bulls lost to the first-seeded Celtics in double overtime. While Boston went on to finish the sweep in three games over Chicago, Jordan’s magical Game 2 performance still stands as the NBA record, some 35 years later.

So, what does a bad round of golf mean to you? Does it inspire you to get better, or give you the drive to keep working? For Michael Jordan, it meant one of the greatest performances of his storied career. And hey, he got back Ainge in the long run, both on the court and the course.