Have You Been Playing Match Play Incorrectly? 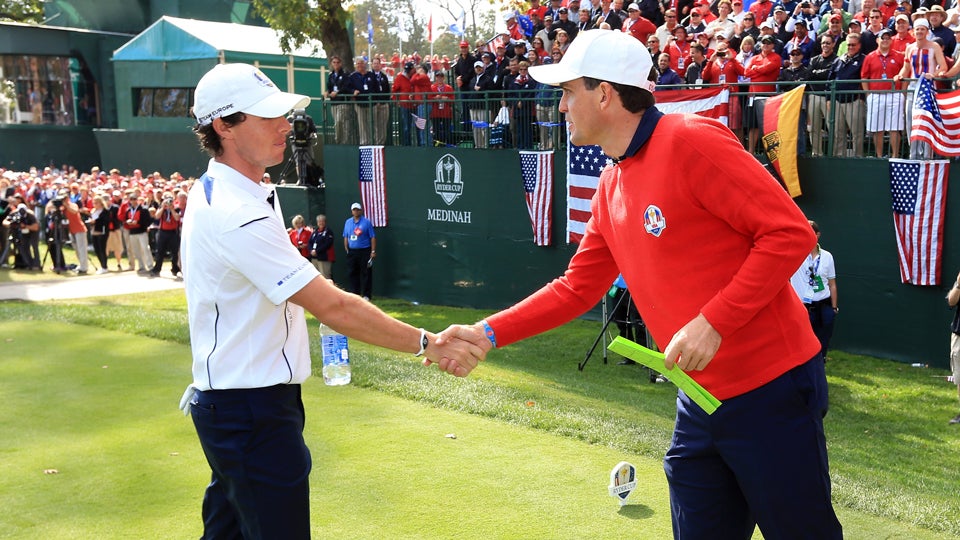 Rory McIlroy and Keegan Bradley shake hands prior to a match at the 2012 Ryder Cup.
Getty Images // David Cannon

Martin Puterman at the University of British Columbia and Timothy Chan from the University of Toronto are trying to make the popular form of competition more equitable to the scratch golfer, the hack golfer, and everyone in between.

Puterman joined the GOLF.com Podcast to explain their findings from a recent study. To make a match equitable, they’ve concluded, players should play to their full handicaps and not have the weaker player play off the difference between him or her and the better player. For practical solutions that might help you win your match, and some money along the way, check out the podcast below. Below that is a summary of their findings.

We often wondered why the better player wins more often in match play. Was this just our perception? Weren’t handicaps supposed to make matches fair? To explore these questions, we undertook a study of how handicaps affect match play outcomes, with the help of University of Toronto computer science student, David Madras.

We used data from four informal club events at Shaughnessy Golf and Country Club in Vancouver, Canada. This data included handicaps and hole-by-hole scores for 392 player rounds. We then simulated over 70,000 matches between pairs of players, allocating handicaps in the customary “stroke off the low handicapper” approach.

For example, if Tim’s handicap was 9 and Dave’s handicap was 13, Tim, the low handicapper, would give Dave four strokes; one stroke on each of the holes ranked as handicap 1 through 4 on their scorecard, presumably the four hardest holes on the course. The effect of awarding Dave a stroke was that if Tim and Dave tied a hole, Dave won and if Tim beat Dave by one stroke, they halved the hole.

Our two main findings were that:

Course hole handicaps corresponded neither to difficulty nor to the order in which holes differentiated scores of high- and low- handicappers.

While 53.1% might not sound like a large bias, it corresponds to an “edge” of greater than 6% for the low handicapper. This exceeds the house edge in almost all casino games. Another way to think about this is that in 100 matches under the current handicap system, the lower handicap player would on average win 53 and the higher handicap player would win 47. Hence if they were better $10 per match, over 100 matches the low handicapper would on average win $60. Certainly one would expect better odds if he or she was going to wager on a match.

Taking these observations into account, we simulated matches under a range of different stroke allocation methods and hole handicap assignments. We concluded that if each player played off their full handicap, (not off the low handicapper) and the higher handicap player was given an extra half stroke in the match, the likelihood of each player winning was 50%. This conclusion remained true regardless of how hole handicaps were assigned.

These two adjustments had different effects. Playing off full handicap removed the effect of hole ordering on outcome. When playing off the low handicapper, the win probability varied by roughly 4% across a range of different hole orderings but when playing off full handicap this variability was only 1%. The effect of giving the high handicapper an extra half stroke moved the win probability from roughly 53% to roughly 50%.

We also explored other modifications to the handicap system to achieve an equal level of fairness across all handicap differences. We found that giving no strokes in the differential range of 0-3, 0.5 strokes in the range 4-7 and 15-21, and one stroke in the range 8-14 achieved fairness for all handicap levels. While this approach is intriguing and indicative of some potentially desirable changes to adjusting handicaps in match play, it would likely be impractical to implement.

We also looked into whether the “bonus for excellence” underlying the handicap calculation impacted fairness. When computing handicaps, a “bonus for excellence” of 0.96 multiplies the average index of the best ten of a golfer’s 20 most recent rounds. When we compensated for this factor, we found that the lower handicap player still had a significant advantage.

Most golfers we discussed these results with found that the notion of playing off full handicaps in match play made sense, especially since it is consistent with how stroke play events are contested. Additionally, a benefit of the extra half stroke to improve fairness is that it does not require any change to the way a golfer’s handicap is currently calculated, unlike other methods aimed at improving fairness. Our research was guided by the principle of making the findings easy to implement. In the end, simply awarding handicap strokes on different holes (i.e., playing off full handicaps) and implementing a tiebreaker on a single hole (i.e., the half stroke), if needed, generated fair matches. We encourage readers to try this idea out in their matches and let us know if fairer match outcomes are observed.

A paper describing the full study is under review at an academic journal; a preprint is available from the authors upon request.