While most of golf’s elite upper crust skipped this week’s Wyndham Championship to rest up for the FedEx Cup Playoffs, plenty of drama is going down in Greensboro. As the regular season comes to a close, players on the margin are battling to secure spots in the playoff field — or risk losing their PGA Tour cards.

There’s a healthy turnover and infusion of new talent on Tour every year, which inevitably means that some top players from years past will battle to keep their cards. Every player from No. 103 to 137 in the FedEx Cup rankings showed up to Sedgefield Country Club, making the 2019 season no exception. Here are a handful of surprising players who just officially lost their full Tour status.

Former World No. 1. Ryder Cup star. Two-time major champion. And now, a pro with no PGA Tour status. Kaymer was No. 146 entering the week and shot 66-75 in Greensboro to miss the cut. Golf Channel’s Will Gray pointed out that even if Kaymer’s number stays inside the top 150, he may not be able to take advantage of any conditional status because he played just 14 PGA Tour events this year, one under the mandatory minimum of 15.

Kaymer still would have some potential entry into tournaments as a past winner on Tour and would be able to accept sponsor’s exemptions, though only up to 12 starts as a non-member.

Hossler has been on the radar of golf fans since he briefly led the 2012 U.S. Open as a 17-year-old amateur and seemed destined for a lucrative PGA Tour career. His best chance to win and secure a long-term exemption came at the 2018 Houston Open, when Hossler lost to Ian Poulter in a playoff. Instead, he entered this week at No. 143 and missed the cut.

Credit to Hossler, though: he quickly kept perspective in a tweet about his loss of status. Assuming he stays in the top 150, Hossler will keep conditional status for next season.

Lost my tour card today. Two things: I’m lucky to be where I’m at, with the support of a great team and family. And success is going to taste much sweeter after this setback.

For years, Mahan was a mainstay near the top of the World Rankings. Even after struggling with his game the past few years, he rallied with a T2 at the Korn Ferry Tour finals last year to keep PGA Tour status. But now Mahan will head back to Finals after entering the week at No. 184 and missing the Wyndham cut. 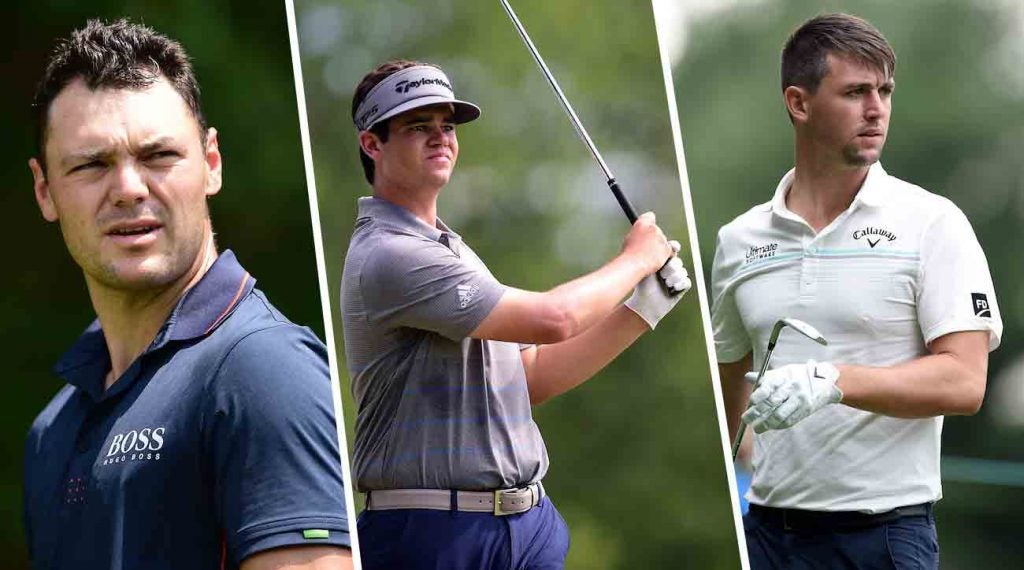 Getting to the PGA Tour is brutally hard — and staying there is no joke, either.
Getty Images

Luke Donald entered the week at No. 191 in the FedEx Cup standings, which meant he was a super-longshot to advance to the playoffs. But the former World No. 1 isn’t truly out of status — he has three starts remaining on a medical extension, which gives him another chance. More likely, Donald can lean on his career earnings, which affords successful players extra exemptions into events.

Luke Donald started the year with 15 starts on a medical extension. But after Wyndham MC, he'll head into next season with just 3 remaining and needing the equivalent of a top-3 finish to keep his card. Still has career $ exemptions to rely on if necessary.

As the vaunted high school class of 2011 continues its run through the PGA Tour, one member has been left behind: Ollie Schniederjans. A year ago, Schniederjans finished T3 at the Waste Management, jumped to No. 77 in the world and felt ascendant. Now he’s coming off seven missed cuts in his last eight starts and a trip to Korn Ferry Finals. I don’t want to pick on Schniederjans here; he just serves to remind hard it is even for many promising talents to retain their Tour cards. Curtis Luck, Sam Saunders and Cody Gribble (who won on Tour in 2016) are among those who will join Schniederjans in a fight to regain some status for next season.

A number of other players including Bill Haas, Daniel Berger and Alex Noren will battle through the weekend in a hope to crack that top 125. The Wyndham may not have the star power — but it doesn’t lack for drama.

‘You wonder: Am I ever going to be back?’ Rickie Fowler opens up on struggles
Go to mobile version