As golf spikes among junior girls, parents can realize the price of passion 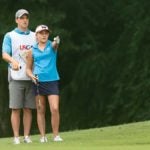 Eleven-year-old phenom Gianna Clemente is good enough to call the shots, thanks to her father, Patrick, who has foot the bill to get her there.

Patrick Clemente has photos of his daughter Gianna, then 18 months, holding a putter at their club outside Cleveland. “She’s not putting, but it’s a cute photo,” he says. It also turned out to be prescient.

A month after she turned five, Gianna played in her first tournament. At seven she won the U.S. Kids World Championship at Pinehurst. Last August, she was the third youngest player ever to play in the United States Women’s Amateur. She is now the top-ranked 11-year-old in the country.

Next year, at 12, her schedule will ramp up when she’ll be old enough to play in AJGA events. To facilitate her budding golf career, the family splits its time between Ohio and Naples, Fla. Her father, who played college golf and works in sales, says he and his wife, Julie, support Gianna’s enthusiasm, but he does pause when asked how much her training costs. “Maybe I haven’t totaled it on purpose,” he says. “It’s definitely an expensive process — there’s no question.”

But the cost for merely good players who want a shot at college golf hovers around $20,000 a year for lessons, camps and equipment. It spikes for elite players entering 25 to 30 tournaments and playing year-round.

“The ultimate goal of my clients is to make it on the LPGA Tour,” says Spencer Graham III, who runs the Junior Golf Performance Academy at Quail Creek CC in Naples. “Parents are spending $150,000 a year, for five to six years, for their child to make it on tour.”

At its best, teaching girls to be great at golf will convey the same social and business benefits later in life that the game has done for boys. But with an elite girl, it’s easy to look beyond those future rounds of business golf or weekend matches to more immediate payoffs.

Jennifer Kupcho, who attended top-ranked Wake Forest University on a golf scholarship, claimed the NCAA individual championship in 2018 and won the inaugural Augusta Women’s National Amateur (see p. 96). She finished 39th in her rookie season on the LPGA, earning $525,000. (The last player to keep her card, No. 100, earned $127,365.)

Coaching is one way to get there. Another is a sports school like IMG Academy, albeit at $95,000 a year. Its star graduate is Paula Creamer, who qualified for the LPGA Tour at age 18 and has won 12 times, including a U.S. Women’s Open. The knock against these academies is they attract the most overzealous parents. Kevin Craggs, who became director of golf at IMG Academy in June, says he keeps the focus on helping children improve.

“Everyone has the aspiration of being the best golfer they can be,” he says. “But no matter how driven or focused you are, a plan B has to be in place, which is a college degree.”

Graham, who coaches many top-ranked juniors, including Gianna Clemente, says he advises parents who are footing the bills to temper expectations.

“They might get a scholarship or a half scholarship, or maybe they’ll get into Harvard or Princeton,” he says. “They may not make the LPGA tour, but they will have a great job and have a great side thing to do if they want to go out with clients.”

A year at Wake Forest (tuition, room, board, fees) is $77,000. But hyper-focused parents could be sabotaging their daughter’s chances of a scholarship — or even admission.

“You have to be able to shoot a score and beat certain people,” says Ryan Potter, associate head coach for Wake’s women’s team, which has six full scholarships. “But there’s a lot more that goes into it for us than just the score or who you beat.”

How a player has been coached to that point is important, but so too is the way she behaves at tournaments, around her parents and on social media.

“How are they acting when we’re not looking?” Potter says. “We’re fortunate that we’re at the point where we can afford not to take a bad kid who’s a great golfer.”

Charlotte Thomas, a British-born player who finished 79th in her rookie season on the LPGA, says she was a slow starter, which saved her parents a lot of money. As a teen living in Singapore, she played country club golf with the occasional tournaments when she visited England in the summer.

It wasn’t until she was 16 that she decided she wanted to play professionally. She was a member of the University of Washington team that won the NCAA title in 2016 and played several seasons on the Symetra tour.

“You don’t make a lot of money early on,” Thomas says. “Without parents who can support you for the first couple of years, it is super expensive.”

For Thomas, it’s been worth the wait. Having qualified for the Ladies European tour in January, she has membership on two tours — and sights set on the Solheim Cup.

A gentleman's game: Like his Bond character, writer Ian Fleming had a love affair with golf