Golf had its biggest Jeopardy! moment ever last night. Here are all the clues

There may not be any live PGA Tour action on TV right now, but golf still made its way into primetime last night on one of America’s most popular game shows: Jeopardy!

Jeopardy! is in its 36th season, with longtime host Alex Trebek still manning the podium, and golf has long been a hot topic for the show’s writers. GOLF.com’s Alan Bastable revealed early last year that the show had featured well over 800 golf-related clues in its history, including in the pilot episode.

News
Tiger for $500, please, Alex: An unauthorized history of golf on Jeopardy!

But on Monday night’s episode, something happened that, to our knowledge, had never happened before: “Golf” represented an entire category during the contest’s first round. Not only that, but all the other category names were golf-related, too.

The six golf category names were as follows: GOLF, “T” TIME, GREENS, FOUR, BIRDIES, and THE MASTERS (OF ART). But only the efficiently-titled “GOLF” category featured actual clues about the game (although the $800 question in the “FOUR” category would be familiar to swing and gear geeks; Answer: The 4 forces of flight are thrust, weight, drag & this upward one. Question: What is lift?) 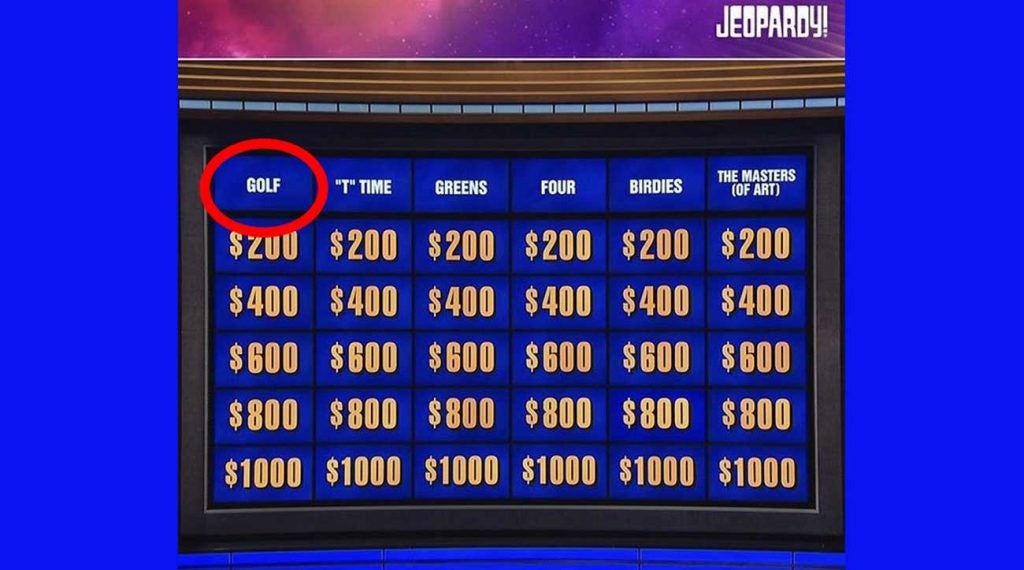 Golf-related category names graced the board on Jeopardy! last night.

This entire article serves as one big spoiler alert, so if you don’t want to ruin the episode, click away now. Without further ado, here are the golf clues that appeared on Jeopardy! last night (BIG h/t to j-archive.com).

In the past, golf clues on Jeopardy! have been decidedly on the easier side, at least for avid followers of the game. That trend continued in this episode, especially with the earlier clues.

Contestant Kyle Dallman, a political recruiter & trainer from Cincinnati, Ohio, had just as easy a time with this one as you did. What is an eagle?

$400: To capture the modern grand slam, a player must win the Masters, the PGA Championship & these 2 opens.

While you might be scoffing at the simplicity of this answer, it’s apparently not as much of a layup as you think. In fact, this turned out to be the only “triple stumper” in the golf category, with none of the contestants even venturing a guess. Golf fans know the correct response, though none of them can tell you whether or not these two tournaments will be played in 2020. What is the U.S. Open and the British Open/Open Championship?

News
11 really hard golf questions that have appeared on Jeopardy!

$600: Sam Snead popularized a putting style named for this other grass and balls pastime; the PGA no longer allows it.

The $600 question presents a legitimate challenge, even for the golf nuts among us. It did inspire some guesses from the contestants, though. First, Kyle guessed, “What is bocce?” Incorrect. Then Monya De, a health journalist from Santa Monica, California, ventured, “What is lawn bowling?” Wrong again. Finally, the with time ticking down, Khalilah Walters, an attorney from Danville, Virginia, offered up the correct response: What is croquet?

$800: The 17th on the Old Course at this Scottish club is known as the Road Hole; lots of players have been run over there.

In a strange twist, the final two golf questions of the episode were decidedly easier than the $600 clue. If you don’t know the correct response to this one, you clearly don’t read this website often enough. Kyle knew it right away. It’s the home of golf, after all. What is St. Andrews?

The writers closed out the category with another softball. Not only that, but it’s eerily similar to a clue on an older episode of Jeopardy! from 2011: “Sand and pitching are common varieties of these irons used to loft short shots.” Both clues require the same response, which Kyle provided once again. What is a wedge?

By the end of the round, Kyle stood on top with $5,000, and his three correct golf responses went a long way to getting him there. In Double Jeopardy!, he officially pulled away from the pack, finishing with $15,400, which he failed to improve on in Final Jeopardy!, but took home the title anyway.

While it’s exciting to see golf play a starring role on the show, these particular clues probably weren’t very hard for you to tease out. If that’s the case, and you’d like to really challenge yourself, be sure to check out our collection of the 11 hardest golf questions that have appeared on Jeopardy!