How golf fans can end their hunger for the Masters 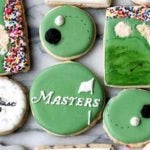 The gallery is made out of sprinkles.

The Masters is covered in frosting.

If professional golf fans are sad that the PGA Tour is on hiatus until June, they really can now eat their feelings.

A Tour player may be the biggest consumer.

The Modern Cookie is owned by Ally Gooch, whose husband, Talor, has made the cut in 12 of 13 events this season and earned over a million dollars. And golf is one of the customizable options for the cookies, which are available only for pick-up in the Oklahoma City area.

There’s a putting green cookie – which features frosting for the green, a white golf ball, a black hole and black dashes that indicate the ball’s path to the hole.

There are the major championship cookies – which feature the logos of the Masters, this year’s U.S. Open at Winged Foot, and Royal St. George’s, which will host next year’s Open Championship after it was postponed this year.

And there are two spectator snacks – which feature sprinkles for fans, sugar for sand and green frosting for either the fairway or green.