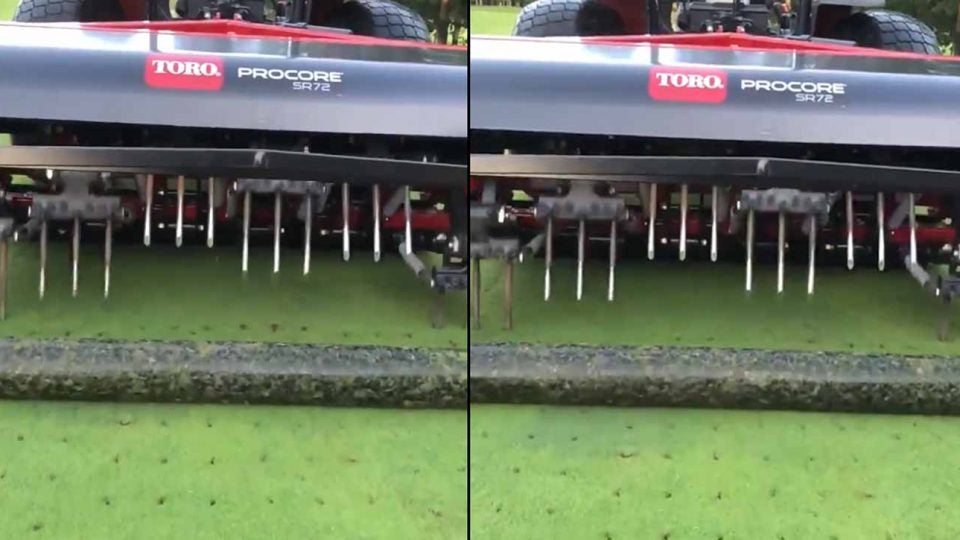 Check out this video of a fairway being aerated below.
@rjmurman on Twitter

No one likes showing up to the local golf course only to find millions of little holes punched into the fairways and greens. To most golfers, golf course aeration, as it’s known, is a necessary evil but a nuisance nonetheless. But we might have found a video that will change your opinion about aeration.

For those of you who don’t know, aeration is the process of punching small holes into greens and fairways to protect the turf health at a golf course. The numerous small holes allow both the soil and the grass to breathe, while also allowing grass roots to grow freely.

It’s a necessary process to keep a golf course healthy, and it’s often done multiple times a year at times when there is lower golfing pressure but the grass is still growing normally. Golf can still be played on a recently-aerated course, but it is slightly disruptive. Let’s be honest, no one wants to putt on a green full of holes.

However, while all golfers have seen an aerated golf course, few have seen a golf course actively being aerated, which brings us to the topic of this post.

Ryan Merriman, the golf course superintendent at East Hampton Golf Club on Long Island, recently posted a video a fairway getting aerated at his course. In the video, an operator drives a vehicle with an attachment at the back that has alternating three-pronged devices that plunge into the turf as it moves down the fairway.

Watch the hypnotizing and oddly satisfying video below and, who knows, maybe your opinion of aeration will change.

Time to obliterate some hard packed parkland fairways for the first time ever. 👍 pic.twitter.com/ZORKIRKzgR