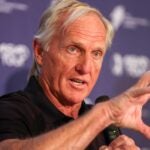 Forget about the Rory McIlroys and the Jon Rahms, Matt Southgate says. They’re not going anywhere. They’ve voiced both their loyalty to the PGA Tour and their disinterest in the LIV Golf Invitational Series, the upstart, Saudi-backed tour backed by Greg Norman.

But don’t forget about the next McIlroys and Rahms.

Could the Saudi tour supplant the PGA Tour? On this week’s Sky Sports Golf Podcast, Southgate said that won’t happen today. But it could tomorrow.

“The most overlooked thing with the Saudi tour at the minute is that everybody is focusing on the players of today and nobody is thinking of the players of tomorrow,” the DP World Tour player said on the podcast. “Five years ago, we didn’t know Bob MacIntyre, we didn’t know Scottie Scheffler, we don’t know Viktor Hovland or either of the Hojgaard brothers. When you start going through the list of players who weren’t on Tour five years ago, it’s quite significant.

And a free-to-enter Q School, with a prize fund, Southgate said, could make the Saudi tour enticing.

“If the Saudis had the money to put on a free tour school with a decent prize fund, then why would you not go and try?” Southgate said on the podcast. “If they’re going to say they’ll have ‘X’ number of tournaments with ‘X’ prize fund, as an 18-, 19-, 20-year-old, then why wouldn’t you go give it a crack?

“Everyone goes to PGA EuroPro Tour school to go and play for 10 grand a week, so why on earth would you not go to the Saudi tour school and earn much more? All they’re doing is taking a punt that you’re going to be the best players in 2026, 2027 or 2030. Rome wasn’t built in a day.”

As the Saudi tour stands today, various reports have said that 15 of the world’s top 100 will play in the first event, in early June. Seven tournaments will follow, and Norman has told Sports Illustrated that he’s planning to invite amateurs to play.

The PGA Tour should be concerned, Southgate said. On the podcast, he also painted a scenario that he described as “a gateway to golfing hell.”

“If Saudi were to put on a tour school for the youngsters and start to produce their own players, which would be easy enough for them to do, then as soon as you ban one current player going to play, there you can’t possibly invite a future player coming back to play,” he said on the podcast.

“Let’s just say the next Bob MacIntyre is 18 years old, and he’s sat somewhere in Scotland today. He goes to the Saudi Tour school and wins, or gets an invite to play on the Saudi Tour, then in five years’ time, he’s world No. 1. You can’t then invite him back to play Scottish Open if you’re banning everybody else already on that Tour from going off to play in the Saudi events. [Editor’s note: Players can’t currently earn world ranking points from LIV Golf Invitational Series events.]

“Are you protecting now and actually opening up a gateway to golfing hell in five years? If you say to Dustin Johnson, you can’t go and play in this because we’ll ban you, then you can’t possibly invite someone from the Saudi tour to go and play in your tournaments.

“If they then produce the best players in the world, you instantly become second and third in the world. That’s five to 10 years of patiently waiting to produce your own players, and that’s scary.”