From Kramer’s sand game to Stan the caddie, ranking the 9 best golf moments in ‘Seinfeld’ 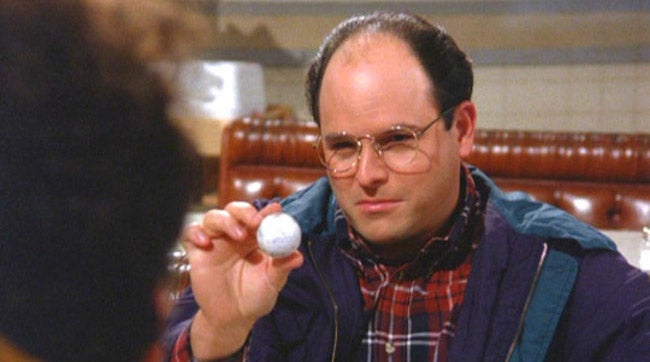 Seinfeld aired its final episode on May 14, 1998. It is arguably the greatest sitcom of all time, a show that transcended pop culture. Twenty years later, memorable episodes, scenes, characters and phrases are talked about as if Seinfeld were still on air. Not that there’s anything wrong with that… For “a show about nothing,” there was a lot of golf mixed in throughout the nine-season run. My hunch is we can thank co-creator Larry David, a well-known golf-aholic, for continuing to put the game front and center, especially in storylines involving Cosmo Kramer. These are the nine best golf moments from Seinfeld, ranked.

This was a spoof on the famous magic bullet scene from the movie JFK. In this case, Jerry debunks a story by Newman and Kramer that a singular “spitter” attacked them after a Mets game. Jerry borrows a golf club from Kramer, which he was using as a walking stick, to help state his case. Who hasn’t used a club as a walking stick and/or to prove a point before?

The only real work Kramer ever did on Seinfeld was on his swing. Why go to the driving range when you can just go to Jerry’s apartment?

7. “The rules are very clear about that”

Golf is a game of honesty and integrity. Kramer enters his second home, Jerry’s apartment, irate over an encounter on the course with his playing partner. According to Kramer, he picked his ball up and cleaned it off before hitting his next shot. That’s a big no-no in golf. Kramer penalized him a stroke and all hell broke lose. As Kramer says: “Without rules, there’s chaos.”

If anyone needed to be steered in the right direction on daily life decisions it was certainly Kramer. Stan the caddie brought the best out in Kramer’s game and they had their sights set on the PGA Tour.

A car accident derailed Kramer’s Tour dreams. Stan the Caddie knew what he was doing on the course, but not in the courtroom…

As much as I loved watching Kramer swing in Jerry’s apartment, it’s even more postcard-esque from the beach. Kramer’s follow through deserves to be made into a course logo. I’m not so sure when you would ever need a driver from the sand, though.

Kramer was the ultimate “I know a guy,” so it should come to no surprise that he was playing on private courses, despite not having a job. He went on a rant to Jerry and Elaine about how he cannot accept going back to playing golf on public courses after playing at Westchester Country Club. If only he hadn’t burned down that cabin with his cigars.

The sheer excitement on Kramer’s face when asking Jerry and George to take a ride to hit balls is one we all have after being cooped up from a long winter. I have yet to ever hit balls into an ocean, but Kramer makes it sound like one hell of a time. And I’m not just saying it sounds like a good time. Though I would probably use balls other than Titleist for the occasion.

Everyone has said they are done playing golf at one point or another. Frustration got the best of Kramer after hitting bad shot after bad shot. “The ball is just sitting there and I can’t hit it” is a line I’ve used a few dozen myself. Serenity now! He did hit one really good one that went “way out there…”

Forget about memorable golf scenes, this is one of the most iconic scenes in Seinfeld history period. George saves a beached whale as a faux Marine Biologist when he discovers an obstruction in the blowhole. Yes, it was Kramer’s one good shot from his beach session. How do we know for sure? George was able to identify the ball.