Franklin Templeton Shootout 2016: 5 Things to Know About the Event 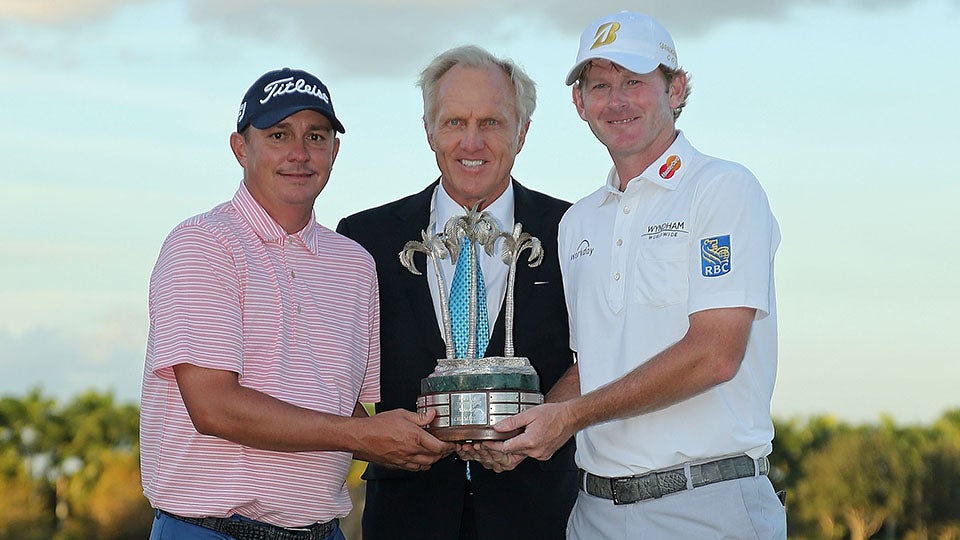 Jason Dufner and Brandt Snedeker pose with Greg Norman and the trophy after winning the 2015 Franklin Templeton Shootout.
Mike Ehrmann

The Franklin Templeton Shootout is hosted by Greg Norman at the Tiburon Golf Club at the Ritz-Carlton Golf Resort in Naples, Florida. It’s colloquially referred to as ‘The Shark Shootout,’ and takes place over three days every year following the fall series of the PGA Tour season. Here are five other things you should know about the event.

Twelve two-man teams comprised of 24 of the top golfers in the world compete in a three-day, mixed-format of scramble, modified alternate shot, and better ball. For the first time since 2006, a female professional golfer will compete in the event — Lexi Thompson will partner with PGA Tour rookie Bryson DeChambeau.

Players qualify for the Shootout by:

Jason Dufner & Brandt Snedeker – After shooting a combined 30 under par to win the Shootout in 2015, Dufner and Snedeker will try to become the first team to successfully defend their title since 2004.

Harris English & Matt Kuchar – The 2013 Shootout champions are back once more to try and avenge their back to back runner-up finishes in 2014 and 2015. Watch out, Duf and Sneds!

Sean O’Hair & Kenny Perry – This will be this team’s fourth pairing in five years after taking the title in 2012. At the time, Perry was the oldest winner in tournament history at 52.

Charles Howell III & Rory Sabbatini – Howell and Sabbatini were runners-up to O’Hair and Perry in 2012 and decided to revisit their pairing in 2015, where they finished 10th. They’ll look for more luck this year.

Smylie Kaufman & Justin Thomas – Tournament rookies this year, friends and half of the SB2K16 crew Kaufman and Thomas each won in 2015, with Thomas successfully defending his CIMB Classic win this year.

Jerry Kelly & Steve Stricker – Eight-time veterans Kelly and Stricker are the oldest team in the field but have lots of experience between them, notching 15 PGA Tour victories combined.

Kevin Chappell & Kevin Kisner – The Kevins are also rookies in this event but will look to capitalize on momentum from hot 2015/16 seasons (Chappell with four runner-up finishes and Kisner with three in 2015).

Charley Hoffman & Billy Horschel – Horschel has paired with three separate partners in each of his Shootout appearances and has never finished outside of top-four. Here’s hoping Hoffman can hang!

Daniel Berger & K.J. Choi – 2015 Rookie of the Year meets PGA Tour veteran in this first-time pairing, which is reason enough to want to root for this team.

Luke Donald & Russell Knox – The United Kingdom is well-represented in Donald and Knox, who may get another chance in the future to play together if they are both selected for the 2018 Ryder Cup.

Jason Dufner & Brandt Snedeker – You can’t go wrong with backing the defending champs. Plus, Sneds has been on a bit of a run lately with a 15th place finish in the FedEx Cup standings, a Ryder Cup win and T6 finish at the Hero World Challenge.

Bryson DeChambeau & Lexi Thompson – Admit it, you want to cheer for newcomer Bryson and LPGA bomber Lexi, at the very least because of their matching sponsorships and sure-to-be on point scripting.

Smylie Kaufman & Justin Thomas – Half of the stars of SB2K16 are fun to watch, plain and simple, but together, they also have three wins over two years on the PGA Tour.

Jerry Kelly & Steve Stricker – Age is just a number for this champion pair, and how cool would it be to see the oldest team in the field celebrate their seven-year-victory anniversary with another win?