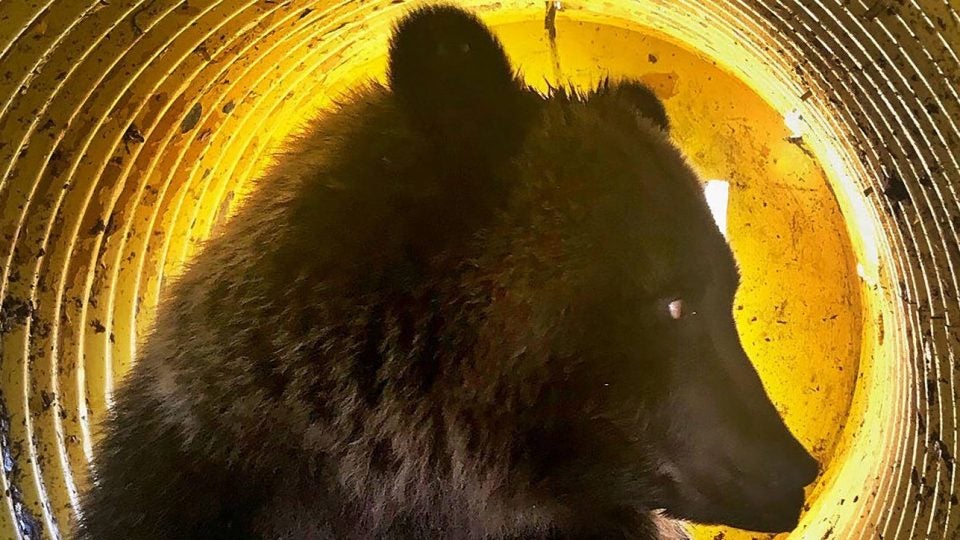 This bear busted his fair share of flagsticks before the golf course found the culprit.
Ravalli Republic

Animals have always seemed to wreak havoc and make themselves at home on golf courses.

First, there was the monkey in The Little Rascals who served as a caddie but spent more time snapping clubs than providing advice. Then there was the infamous gopher from Caddyshack who drove Bill Murray’s character Carl nuts. Most recently, we had the enormous alligator Chubbs make a guest appearance during someone’s round.

Now, we can add this grizzly bear to the list of animal culprits on the greens.

A young male grizzly bear was captured from Whitetail Golf Course near Stevensville, Mont., on Saturday after it was discovered that the bear was snapping flagsticks, according to the Ravalli Republic.

The course’s golf pro first noticed something was up when he saw a broken flagstick on one of the greens. Two more had been snapped off the next morning. Last Wednesday a fourth flagstick was snapped, except this time, the evidence revealed the mystery vandal; the bear had dug a large hole in the grass. The bear was likely hungry and looking for worms, a biologist told the staff. But despite setting up a course camera, and even with several golfers playing rounds, no one had spotted a grizzly.

“We thought it was probably a vandal at first,” golf course pro Jason Lehtola told the newspaper. “And then we saw some tracks in a bunker and some scat piles. I couldn’t tell that it was a grizzly, though, at that point.”

After realizing the culprit was an animal, Whitetail called Montana Fish and Game to bring a trap. It worked. On Saturday morning the trap caught the grizzly about 100 yards away from the clubhouse located between the 7th and 8th holes.

“I could tell we had something in the trap,” Lehtola said. “I started walking over there to take a look. I got about 30 yards away, when it must have smelled me. It was facing the other way in the trap and then all of a sudden it turned. It hit the end of the cage and gave me a growl. I turned around and went back and hopped in my car.”

Lehtola said the grizzly had big claws and a massive head.

“It was pretty scary,” he said. “I’m feeling pretty lucky we didn’t have anyone hurt. We’ve had tons of people out golfing. I know that it scared the hell out of me when it smacked up against the cage. It’s not something that I want to run into the wild.”

After the bear was captured it was released into the wild far enough from terrorizing another golf course.