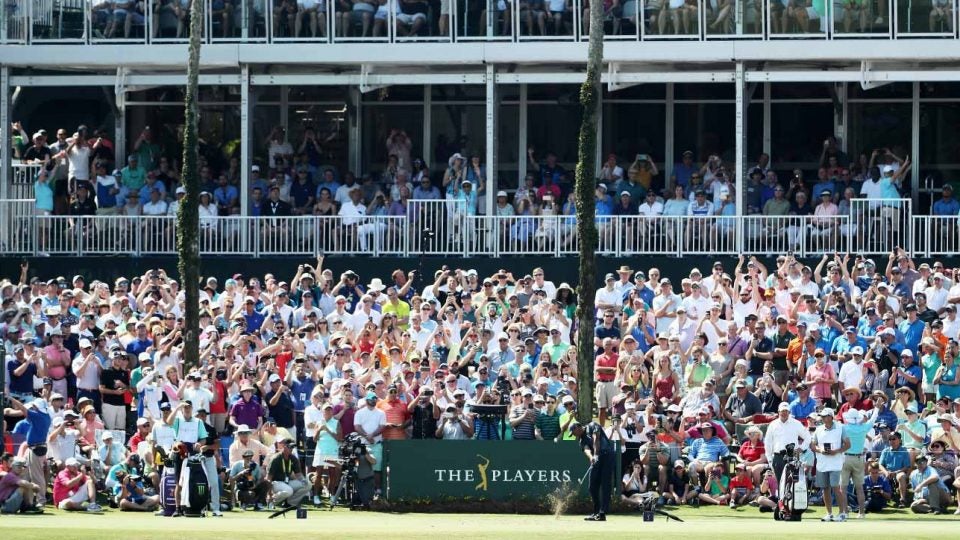 Tiger at the tee box on 17 at TPC Sawgrass.
Getty Images

At half-past WAY too early on May 11, 2018, I snapped from sleep with all the grace of a runaway train.

“JJ,” my dad barked in a harsh whisper. “I’m not doing this again. You gotta get up.”

It was still black, the first embers of light several hours removed from the horizon. I wiped the sleep from my eyes and sat up. The dilapidated air mattress I’d crawled onto late the previous night sagged.

Dreary-eyed, I walked to the kitchen and poured myself a cup of coffee. Dad reared back into the room and implored me to follow my brother’s lead and get dressed. He’s a morning person. I’m … not. But the morning of May 11, 2018 was special, so I complied, digging through my carry-on for a fresh pair of socks.

An hour later, we pulled through the gates at TPC Sawgrass in our rental mini-van and greeted a surprised parking attendant. We were, quite literally, the first people in the lot. It was Friday morning of Players Championship week and the sun still hadn’t risen.

The exhaustion shed from me as we ambled out of the car and through the gates.  Just a day prior (late Wednesday night), our plane had landed in Jacksonville via JFK.  Less than a day before that, I’d finished finals, packed my belongings, hopped in the car and scrambled home, officially a rising senior at Syracuse and eager to ring in the summer. Now, I’d decided to embark upon a different kind of marathon — braving the crowds, the hysteria and the heat to watch Tiger Woods play 18 holes at the Players Championship.

I’d been angling my dad, my brother and my cousin to follow Tiger at the Players since he’d made his return to golf at the Hero World Challenge in December. I’d seen Tiger play a few times, but now that I’d begun to understand the scope of his career, I felt a vocation to experience a full round within the hordes.

News
Silver lining? Why postponing the Games would give Tiger one last chance to turn Olympic golf into a big deal

We watched from afar as Tiger’s comeback continued in the early months of 2018, nabbing top-5 finishes at the Valspar and Bay Hill. Watched as he played in his first Masters in three years, the most heartening T32 any of us could remember. Watched as his confidence grew with each event, his swagger swelling with every club twirl. Then, a few weeks out, Tiger committed to the Players for the first time since 2015. We were in.

Anticipating an old-fashioned “Tiger crowd,” we figured to catch it at its lightest if we forced ourselves to get to the course for his early Friday tee time. As for Thursday, we’d approach it as we did every other golf tournament — head to a hole, grab a good vantage point, hang out for a few hours, wait for the big groups to come through, go to another. Rinse. Repeat. If we saw Tiger’s group during the first round, great. If not, we’d see plenty of them in round 2.

We lucked out. On Thursday, we were perched on the 9th green when the masses rolled in. From a perfect vantage point, we watched Tiger poke a long iron to 15-feet, then walk his putt in for eagle. The roar was unlike anything I’d heard at a sporting event, let alone a golf tournament. This wasn’t a crowd — it was a rollicking, high-fiving, beer-pounding mob.

I couldn’t wait for Friday. 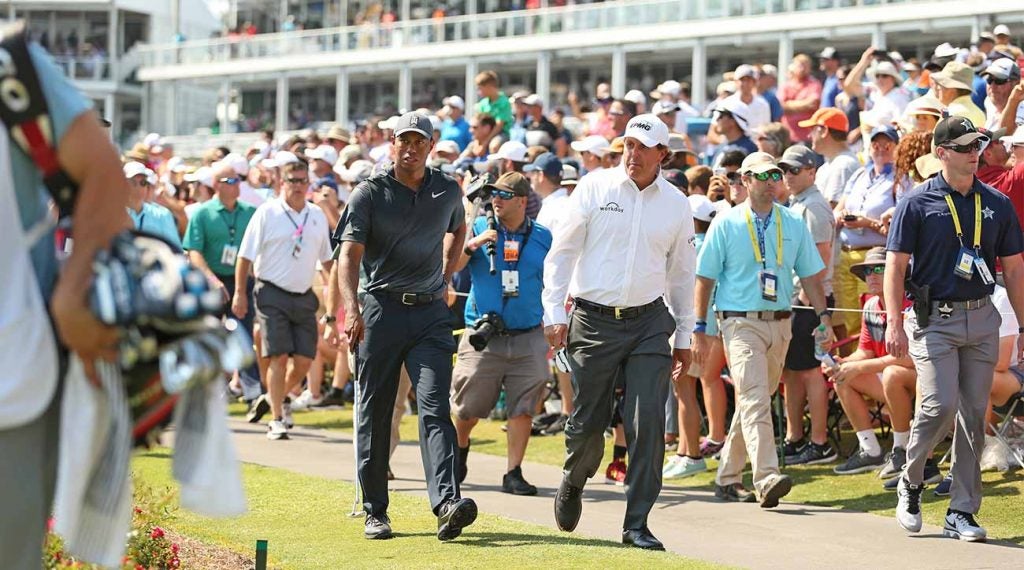 It was a scene cut from the “Ed Sullivan Show.” Tiger Woods striding toward the first tee with Monster squeeze bottle in hand. The gallery crowding the ropes to no avail, craning their necks for a good look. The air thick with humidity and nervous anticipation. An awestruck pulse rippling through the throngs detecting the most recognizable face in the golf universe. When the starter announced his name, the earth shook.

Tiger teed off shortly after 8:30 a.m. local time, but we never saw it. The crowd was at least 10 people deep. We followed him up to the green, but we didn’t know he made par until the standard-bearer walked past us in the second fairway. Obliviousness is an unfortunate consequence of life among the rabble. Mostly, what I remember from the following five hours are the glimpses: the slivers of inexorable concentration, the morsels of brilliance, the fragments of the player who was (and might be yet again).

Though I probably remember more from Tiger’s round than he does — the stinger on 18 notwithstanding — his performance was trivial. The round was inconsequential, a 1-under 71 en route to a T11 finish on the weekend.

Rather, what mattered is what it meant. How the crowd exploded when he succeeded, and how it agonized when he struggled. How his focus normalized its enormity. We were witnessing what amounted to a drop in an ocean of infinitely more consequential moments.

What mattered was the inanity of what followed him. Not solely the people, but the aura, the history. The scope was unfathomable, but we’d come hoping to witness the unfathomable. To place our stakes in history. To tell our grandkids we’d seen Tiger Woods play a round of golf, even if we didn’t do much “seeing” anything. To share the moment with our dads, our brothers, our moms, our sisters, our sons, our daughters.

It was no more evident than during Tiger’s walk to the famed 17th tee. A nervous buzz hummed throughout — an orchestra tuning. Suddenly, silence filled the air. The conductor stepped to the stage weather-beaten, his hands worn. His finest days had passed, but it was no matter. He played and we were grateful.

The sound has since faded from my memory. Clearly, the feeling has not.