This would-be agent wants to transform how golfers are represented. All he needs is a client

Mac Barnhardt is seeking the first client for the rest of his life.

If golf has a real-life Jerry Maguire, it’s Mac Barnhardt, who has, over the past 25 years, represented Davis Love, Justin Leonard, David Duval, Lucas Glover, Brandt Snedeker and other popular favorites. At the moment, he doesn’t represent anyone. Still, his quest remains: to sign the first new client of the rest of his life.

When the U.S. Amateur is played, as it was at Bandon Dunes last week, it’s a holy week for amateurs. The event is also a confab for agents, at which (in normal times) they size up talent and chat up parents and swing coaches. In this odd year, owing to the pandemic, the agents were not hovering, but last year, like every year, they were. Any winner of a U.S. Amateur can expect to be overwhelmed with agent attention. Last year’s Amateur champ, Andy Ogletree, found that out. Barnhardt was among Ogletree’s suitors. Every agent is trying to sell something. Barnhardt sells the lessons of his life. To be frank about it, it’s not what most young golfers or their parents want to hear. Barnhardt doesn’t particularly care. He knows it’s the best thing he has going for him because he knows it’s the best thing he can give a potential client.

In 2013, the company Barnhardt owned, Crown Sports Management, was bought out by Lagardère Sports, which has a golf division run by Steve Loy, Phil Mickelson’s agent. In May 2018, Barnhardt was, in his own candid telling, fired. That act triggered a noncompete clause. Barnhardt was pushed to the sidelines for a two-year period. Those two years have come and gone and then some. Which brings us to the comeback he is attempting.

In the story of his business life, to turn our subject’s 58 years on this earth into a movie script, Barnhardt’s in the part of Jerry Maguire where Jerry (Tom Cruise) is trying to recruit the fictional NFL receiver Rod Tidwell (Cuba Gooding Jr.) to be the first client in the new, we’re-humans-first agency Jerry wants to launch. In real life, Barnhardt settled on his Rod Tidwell last summer. That’s when he started focusing his particular brand of attention, with its curious blend of purposefulness and nonchalance, on Ogletree, a tall, lean golfer from Union, Miss., where his father owns a Piggly Wiggly grocery store.

There have been U.S. Am winners who were destined for professional greatness (Jack Nicklaus, Phil Mickelson, Tiger Woods). And many more who were not (Bill Sander, Nathaniel Crosby, Steve Fox). The cognoscenti don’t consider Ogletree a can’t-miss kid. The Georgia Tech golfer was ranked No. 120 in the World Amateur Golf Rankings. But Mac is a true believer.

“I love his work ethic, his intelligence, his maturity, his family, his value system,” Barnhardt told me during the PGA Merchandise Show. That was in January, at a time when Barnhardt, among others, was trying to get a commitment from Ogletree, without endangering the young man’s amateur status. (Doable, if you know the applicable USGA and NCAA rules.) Ogletree’s plan then was to choose among his suitors, play in the Masters in April as an amateur, turn pro the next month, after the NCCA tournament. Then a nasty virus turned the world on its head.

So instead, Ogletree stayed amateur. He played in three Tour events as an amateur and missed three cuts. At this year’s U.S. Amateur, he played in the 36-hole stroke-play qualifier and missed a playoff to qualify for the match play portion of the championship — that is, the main event — by a shot. Being an agent in pursuit of a high-profile amateur is a high-wire act, with a lot of ups and downs. It can be like being a Hollywood director where one’s status is dependent on your last movie’s box office.

As it happens, Barnhardt’s story actually does share a lot of Jerry Maguire. Except that is mainstream entertainment and you know how it’s going to end. If Barnhardt were available on Netflix, it would be a documentary with a familiar beginning, a revealing behind-the-scenes middle and a TBD end.

In truth, Barnhardt is looking to do more than come back. He’s looking to reinvent how golfers are represented. The last time that happened, in the early 1960s, Mark McCormack was wearing a plaid coat and could deliver Arnold Palmer, Jack Nicklaus and Gary Player, as a package, to your pro-am and cocktail party. Barnhardt in 2020 (and beyond) does not want to be an agent in the traditional sense. He wants to be a performance coach, an advisor, a member of the golfer’s board of directors. He wants to vet and manage the group around the golfer that will help the golfer play better golf. “Talent minus distraction equals performance,” Barnhardt likes to say. He wants to reduce distraction.

A telling phrase of the management business describes how the agent “looks after” (a chiefly British phrase) this player or that one. Mark Steinberg, for example, of Excel Sports Management, looks after Tiger Woods, Justin Rose, Matt Kuchar. Barnhardt doesn’t want to hold the hand of his golfers after their rounds or walk with them for 72 holes. “Those things aren’t going to help the golfer perform better,” he says. Barnhardt’s starting point is that to make it today, a golfer needs a team.

Mock that belief if you like, but at your own peril. Not a team with a big roster, mind you, but a team nonetheless. The right caddie, swing instructor, mental coach, fitness guy, club-fitter, accountant, travel-and-docs person. Plus, a designated place to meet these people and do the associated work during tournaments and on off weeks, too. In the mission statement in his mind, Barnhardt says that his job will be to make sure the fits are good ones, that the relationships are managed appropriately, that the financial terms make sense.

The professional golfer should think of himself as the CEO of a small business. 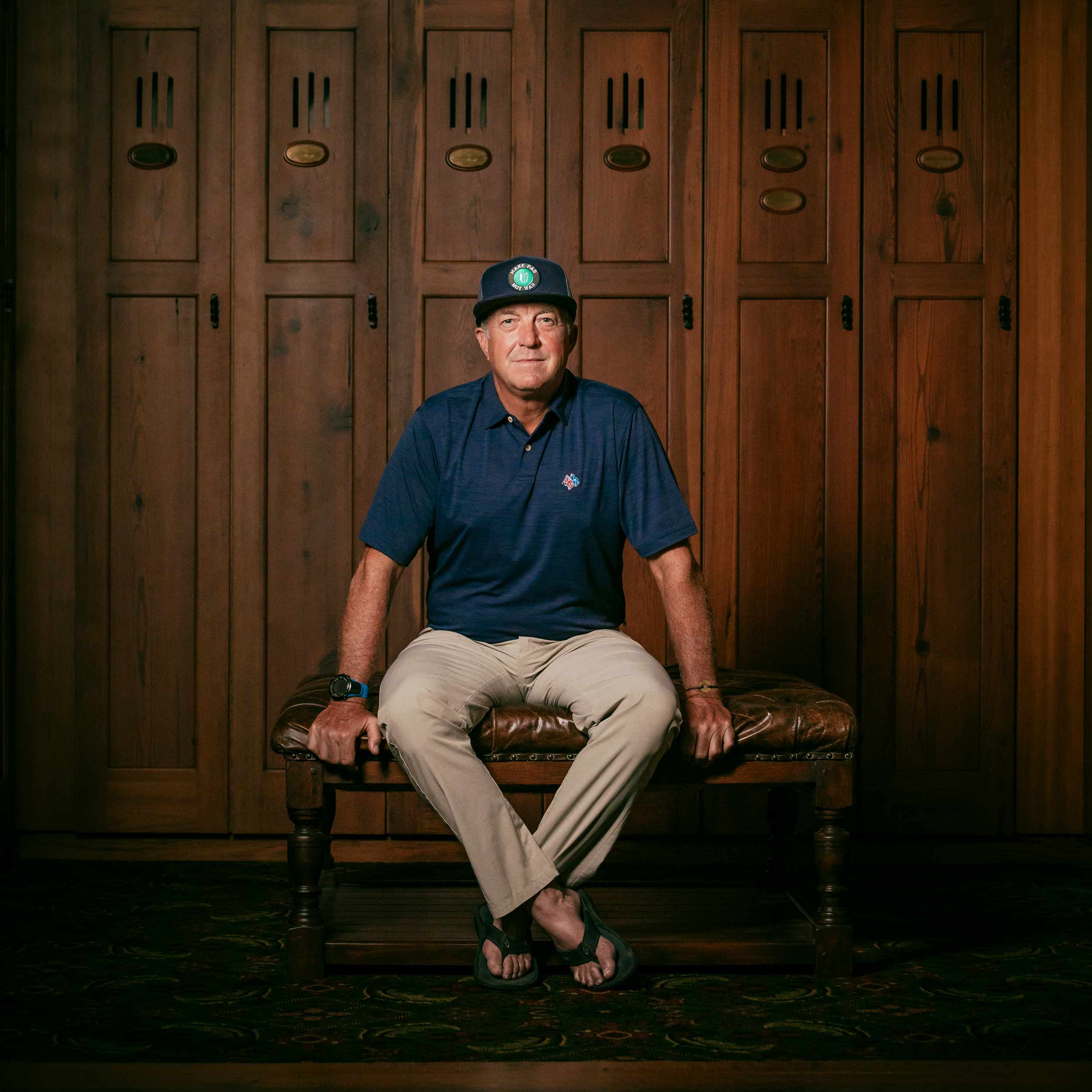 “The professional golfer should think of himself as the CEO of a small business,” Barnhardt says. “The product is tournament golf scores, the lower the better, the more years at it the better. Everything the golfer earns comes from that, and every person in the golfer’s life should contribute to performance. The best golfers have always thought about what they earn on the course, not what they make for showing up someplace.”

Barnhardt is a plus-four talker who sprinkles in references to psychologists, philosophers, ballplayers, snow-boarders, business visionaries and military generals in his conversation. His father was a Methodist minister, and the son learned at his feet, except now Mac doesn’t believe in divine anything. He believes in planning, staying the course, adjusting as necessary. He believes in work, even if work is playing golf at home with your buddies five days a week. He does not believe in get rich quick.

“A lot of the fathers of a lot of the kids looking to turn pro ask the same questions,” Barnhardt says. “’How many tournaments can you get him in? What guarantees can you give him?’

“Those aren’t the right questions. The right way to look at it is this: You hope this is the start of a 15-year career. Your son’s good, but he needs to get better and these are the things he needs to do.”

Now that doesn’t sound particularly fun, does it? It has the advantage of being Barnhardt’s hard-earned truth. But fun it’s not.

All the things Barnhardt has learned over the past 25 years are the things that, if he said them, practically guarantees that he won’t sign the young player. This conundrum is known broadly as a Catch-22.

“It could reinvent the business — or I could wind up working as a lift operator at Sun Valley,” Mac will tell you.

[My approach] could reinvent the business — or I could wind up working as a lift operator at Sun Valley.

It’s an amusing comment and a telling reference. Barnhardt came up in a legendary agency, Pros, Inc., located in Richmond, Va. That agency represented Tom Kite, Lanny Wadkins, Davis Love and other golfers catching southbound trains. Mac’s job was to make the trains run on time. He looked the part and knew the lines. In 1999, Pros, Inc. was bought by Octagon. In 2003, Barnhardt broke away and became Love’s full-time guy. Soon after, he started Crown, signed Jonathan Byrd and Glover, made Sea Island, where Love and Barnhardt both live, a center for Tour players. None of this is as tidy as it sounds. It couldn’t be.

As Mac became more of his own guy, he started dressing more like the snowboarder Shaun White and less like Steve Loy and Mark Steinberg. You’d often see Barnhardt at tournaments wearing a hoodie, a flat-brimmed cap and tennis shoes, talking about new-agey things.

All the while, he was taking a lot in. He could read players — his own and others. He’d casually make prescient observations. When Player X, a winner and a star, bought a home with an elevator, Barnhardt said, “He’s broke, he just doesn’t know it yet.” (That proved to be true.) Barnhardt has a keen understanding of the PGA Tour’s C-suite execs and how they work with Capitol Hill pols, network television deal-makers, mono-named star golfers. He knows how to read the fine print of a contract, how to ask for sponsor exemptions, how to get Korn Ferry Tour status. There’s more to being an agent than standing under a tree and chatting people up, although that’s an important skill, too.

Barnhardt is eager to see what Ogletree does playing alongside Tiger Woods at the Masters in November, if traditional Thursday-Friday threesomes are maintained.

Maybe Ogletree will be the 36-hole leader at Augusta in November. Maybe he’ll shoot 150 and miss the cut. Either way, this is Barnhardt’s view: The kid is 22. He’s good at golf, loves the game, works hard at it and has already accomplished way more than most. Let’s see what the next 15 years brings.