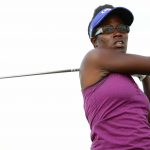 When Georgette Rolle describes how she got her start in golf at age 6, she says she simply got lucky. Her mother’s boyfriend at the time, looking for a way to get the kids out of the house on the weekend, suggested that Georgette and her sisters sign up for the Bahamas Golf Federation’s junior golf program. Even though Georgette was too young to officially participate, she dutifully tagged along.

For Georgette, it was the allure of the free pastries from the clubhouse bakery — not the chance to swing a golf club — that kept her coming back. But over time, she made new friends, spent more time on the range and less time eating pastries, and by the time she was 14, Georgette had the opportunity to represent the Bahamas on the country’s national team.

The tournament was a humbling experience. On one par-3 that required a long carry over water, Georgette made a 16.

“That was my first experience of getting kind of tossed into the deep end of the pool and realizing that I couldn’t swim,” Rolle said in a recent interview. “And at that tournament I’m sure that there were a little over 100 players and I was second to last. And I said, ‘Never again.’ I just didn’t want to be that far in the back ever again. And it wasn’t because I wasn’t necessarily good enough, although I wasn’t. It was more so because I didn’t spend enough time mastering the craft.”

That week marked a turning point for Rolle. From that point on, she committed herself to practicing. Hard. And it paid off. Rolle was awarded a golf scholarship to Alabama State University, where she competed for a year before transferring to Texas Southern, in Houston.

Though Rolle’s game had progressed to the point where she could shoot under par consistently, a career in professional golf was never her ambition — at least not initially.

Instead, Rolle had dreams of becoming a doctor. She got her degree in biology with a minor in chemistry, and pursued a master’s degree in biology after graduating. Then, another turning point: At the same time Rolle was playing some of the best golf of her life, she received a full-scholarship offer to pursue a MD-PhD at the University of Texas’ Anderson Cancer Center. But Rolle’s lab-work schedule was so demanding that she had to choose one or the other, and golf won.

Rolle competed on what was then the LPGA Futures Tour (now the Symetra Tour) but never achieved full status. She starting teaching a bit, volunteering at her local First Tee chapter in Texas and learning more about the golf operations side of the industry. Turns out, Rolle’s research background served her well when it came to swing analysis and study.

By 2014, Rolle felt a call to return to the Bahamas with a goal of sharing everything she’d learned with Bahamian juniors, in an effort to grow the game at the grassroots level. As luck would have it, the Jack Nicklaus-designed Royal Blue golf course at the Baha Mar resort opened soon after Rolle moved back, and Rolle took a job as an assistant professional, soaking up all the knowledge she could, and eventually earning LPGA Class E membership.

Teaching juniors became a consuming passion, and Rolle’s once sporadically-scheduled junior golf camps soon evolved into what is now the Fourteen Clubs Golf Academy. Under Rolle’s direction, Bahamian juniors went from having one junior national championship on the tournament schedule to a total of seven competitive events to play in through December.

Rolle also was determined to improve the retention rate among junior golfers. By implementing the Operation 36 model — in which beginners are instructed to learn the game by playing from 25 yards in, with a goal of making a 4 on each hole for 9 holes (for an even-par score of 36), and then moving back to 50, 100, 150 yards, and so on as the golfer masters each distance — Rolle made a huge impact in terms of keeping the juniors interested. She estimates that academy enrollment has doubled since 2018.

Operation 36’s built-in incentive to work on the short game bumped up the retention rate, Rolle says, “Because now the kids have some more personal goals.”

Rolle also explains the swing to the juniors in terms of “swing combos,” breaking down the swing into segmented, numbered positions (“P1,” for example, is the position at address). This method allows juniors as young as four years old to practice various combos during group clinics, enabling them to work independently and thereby allowing Rolle more time for personalized instruction with each child.

“Our swing combo system and the Operation 36 model combined is a win-win for us,” Rolle said. “And you can see the kids growing.”

Two of Rolle’s former female juniors are now on golf scholarships in the U.S.: one at the University of Missouri, and the other at Rolle’s alma mater, Texas Southern. Rolle’s juniors aren’t the only ones achieving new heights. In March, Rolle was named Baha Mar’s head professional — the first woman ever to hold such a position in the Bahamas.

So, given all that she’s achieved, what’s next for Rolle?

“I’ve always wanted an army of junior golfers,” she said.

To mold the next Georgette?